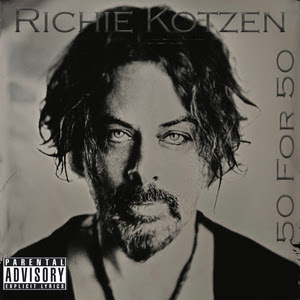 Guitarist/singer/songwriter Richie Kotzen is doing something very special for his 50th birthday (which happens to be on Monday, February 3rd). Instead of receiving presents, he is giving his fans a present. A new album of 50 unreleased, unpublished songs that Kotzen had hanging around in his vault that were written and performed by Kotzen for his birthday celebration. The release titled "50 FOR 50" is a three-disc set of full songs. These are not just thoughts, but full songs that show us the many different sides to Richie Kotzen's songwriting.

The first disc comes right out rocking with the electrifying energy of "Stick The Knife" and "As You Are," which is exactly what we would expect from this veteran guitarist. The nice surprises on this first disc are the funk-infused, jazz/rock fusion of "Dirty Tricks" and the low-down blues of "Living The Dream." Kotzen touches upon progressive rock, with the build up of "Devil's Hand" and also showcases his softer side with the emotional closer "Innocuous."
The second disc of this set  begins with the seventies, guitar rock sound of "Radar" and the aggressive hard-hitting "Freeze." His sound takes a turn toward pop/rock with "Who I Am," before delivering the exciting, guitar wizardry of "Feather Weights." He takes you to the church of rock with the power ballad "Second Page," while "Circus Song" is a swift-pace guitar instrumental which reminds you of his amazing talents on the instrument. It feels like Richie brought some Prince influences to "Lay It On," before finishing with the slow, swaying melody of "I Am A Clown."
The third and final disc of this new release finds Kotzen return to the hard rock of "Play The Field" and "Dark Places," before switching gears once again for the slow, burning blues of "My Circles." The sweet harmonies and gentle touch of "Edge Of The Earth" allow you focus on the song's beautiful lyrics, while "She's The Man" finds Kotzen getting funky with his guitar work. The 50 song set wraps up with the welcoming guitar instrumental workout of "July 14" and the spiritual feel of "This House." To find out more about Richie Kotzen and his new release 50 FOR 50," please visit facebook.com/richiekotzenmusic.
Posted by JP's Music Blog