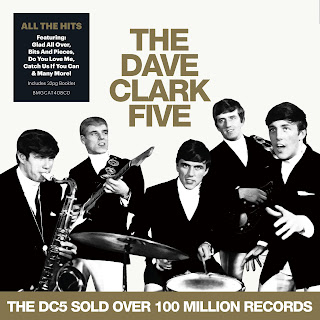 British rock and roll band, The Dave Clark Five (The DC5) may be best known for their #1 single "Glad All Over," which knocked The Beatles' "I Want To Hold Your Hand" from the top spot on the U.K. singles chart. The Dave Clark Five also have had two #1 hit singles in Canada with their songs "Bits And Pieces" and "Over And Over." To celebrate the band's accomplishments, BMG will release The Dave Clark Five "All The Hits" on January 24th. This new 28-track release will be available on CD and on vinyl.

Beginning with their cover of The Contours' "Do You Love Me," the hits just keep on coming with "Glad All Over," "Bits And Pieces" and "Can't You See That She's Mine." All of the songs in this set have been remastered by Dave Clark at the famous Abbey Road Studios for this special release to celebrate the band's formation 60 years ago.

The Dave Clark Five showcase their swagger with the blues stomp of "Don't Let Me Down," along side the raw pounding rock delivery of "Any Way You Want It" (which was covered by Kiss in the late-seventies). The beauty of their harmonies are heard in the ballad "Because" and the fun that they pour into their performances is felt in the rockabilly swing of "Reelin' And Rockin'." All that The Dave Clark Five needed was two minutes to grab our attention, like in "Over And Over" and "Nineteen Days." This fabulous new "greatest hits" set closes with the chant of "Sha-Na-Na Hey Hey Kiss Him Goodbye," the positivity of "Put A Little Love In Your Heart" and the message of "Universal Love." To find out more about the The Dave Clark Five's new "All The Hits" release, please visit musicglue.com/the-dave-clark-five.
Posted by JP's Music Blog