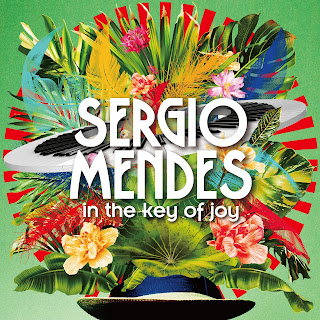 February 28th is the arrival of the new album from Brazilian legend, Sergio Mendes. Mendes, who is working on his sixth decade in the music industry, collaborated with many of today's hit-making and rising artists to create "In The Key Of Joy." The album also co-insides with a new documentary of the life of Sergio Mendes, by filmmaker John Scheinfeld ("Who Is Harry Nilsson?"). A new two-disc deluxe version of Mendes' new album includes the soundtrack for the documentary on the second disc.

Sergio Mendes' new studio album "In The Key Of Joy," begins with Common lending his lyrical talents to the Latin swing of "Sabor Do Rio," as Sergio's talents for finding the perfect groove is on point. Sugar Joans adds an R&B vibe to the swagger of "Samba In Heaven," while Latin singer Gracinha Leporace is featured on four of the album's tracks, putting her stellar vocals on the modern feel of "Muganga" and "This Is It (E Isso)." Sergio Mendes closes his new album with the beautiful ballad "Times Goes By" with Shelea Frazier and the flowing melody of "Tangara."
The second disc of the deluxe edition features sixteen of Sergio Mendes classic tracks that make up the soundtrack to the documentary of his life. It begins with the well-known "Mas Que Nada," which has been featured in a number of movies ("Austin Powers" & "Rio"). The Black-Eyed Peas' will.i.am is featured in the modern sounding "Agua De Beber," while "Primitivo" goes back to the earlier days of Mendes' career, as this soundtrack also showcases his work with Cannonball Addereley and Herbie Mann. Mendes' band, Brasil '66 is also featured with the inclusion of their cover of Little Anthony & The Imperials' hit "Going Out Of My Head" and "The Frog." The disc finishes with the smash hit single "Never Gonna Let You Go," which was credited to Sergio Mendes for its unforgettable melody and then closing out the disc with the rhythm-infused "Fanfarra - Cabua-Le-Le," which feels like the sounds of Brazil come to life. To find out more about Sergio Mendes' new album "In The Key Of Joy," please visit sergiomendesmusic.com.
Posted by JP's Music Blog