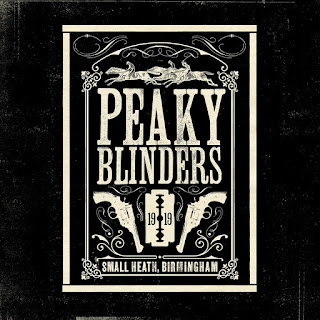 The highly successful BBC/Netflix drama "Peaky Blinders" recently completed its fifth season late last year and also received it first official soundtrack release. The music chosen for this series perfectly matches the era of Birmingham, England following the aftermath of World War I. Street gangs were on the rise in the slums and you had to be tough to survive, which is matched by the music presented on this soundtrack.

Dialogue from the show is intertwined throughout the soundtrack, to give a bases to some songs like Dan Auerbach's "The Prowl" and Jack White's "Love Is Blindness." Nick Cave & The Bad Seeds perform the theme song "Red Right Hand," which has now become synonyms with the show with its steady rhythm and dark lyrics. PJ Harvey also performs a cover of the song on the soundtrack, giving its meaning a more somber tone with its mellow piano vibe.
Nick Cave & The Bad Seeds appear a few of times on this soundtrack, capturing the perfect mood for a specific scene, as with the lighter acoustic-based track "Breathless" and with the darker feel of "The Mercy Seat." One of the great things about this soundtrack is that they also include some hard rocking numbers, like "Come On Over" from Royal Blood and "Snake Oil" from Foals.
Personal highlights for me is the inclusion of "Lazarus" from David Bowie's final album "Blackstar." I feel this perfectly captures the mood of the era with its lyrics of "nothing to lose" and its rising melody. Another one is Black Sabbath's "The Wizard," which always had that controlled chaotic feel with the music, along with Ozzy's harmonica blasts which signal a call to arms.
This soundtrack is also an introduction to English singer/songwriter Anna Calvi, who has won six British music awards in the past eight years. Her songs "Papi Pacify" and "You're Not God" display a different type of songwriting that captures the emotion of the moment in her music and words. The 3-LP/2-CD soundtrack wraps up with Richard Hawley's cover of Bob Dylan's "Ballad Of A Thin Man," which feels like it was written specifically for this series. For more information on this newly released soundtrack to the television series "Peaky Blinders," please visit umc.lnk.to/PeakyBlinders.
Posted by JP's Music Blog