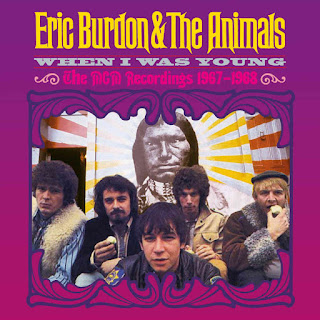 The English rock band, The Animals formed in 1964 and produced a handful of hits that included "House Of The Rising Sun," "We Gotta Get Out Of This Place" and "Don't Let Me Be Misunderstood." Two short years later, the line-up went under numerous changes and in 1967, Eric Burdon & The Animals released their first single "When I Was Young." Esoteric Recordings collected all of the recordings that Eric Burdon & The Animals made for MGM Records between 1967-1968 and boxed them up for a new 5-disc release titled "When I Was Young: The MGM Recordings 1967-1968."

The 5 CD set includes each of Eric Burdon & The Animals original albums ("Winds Of Change," "The Twain Shall Meet," "Every One Of Us" and "Love Is") remastered from the original tapes with ten bonus tracks. The band definitely took on a more psychedelic feel on their album "Winds Of Change" with songs like "Poem By The Sea" and "Hotel Hell," but still knew how to rock, as in "Yes, I Am Experienced." Some of the bonus tracks on this first disc are the rare B-sides "A Girl Named Sandoz," "Ain't That So" and "Gratefully Dead."
Disc two covers "The Twain Shall Meet" album, which included one of the band's biggest singles "Sky Pilot," all seven minutes of it. The only few bonus tracks on this disc features the single version of their blues/rock anthem for "Monterey," without the sitar opening. Also included is part one and two of "Sky Pilot," which was split for a radio. The band stripped down their sound for the simpler sounding album "Every One Of Us," highlighted by the single "White Houses." The folk sounds of "The Immigrant Lad" and the epic closer "New York 1963-America 1968" are a only a couple of examples of how great these songs sound being remastered from the original tapes for the first time.
After only two years, Eric Burdon & The Animals would record their final album together, the double-album "Love Is." It featured everything that the band had to offer, from the rock and roll swagger of "River Deep, Mountain High," the psychedelic trip through "Coloured Rain," to the bluesy cover of "Ring Of Fire" and "As The Years Go Passing By." The set breaks up the final track on the "Love Is" album into the two separate tracks "Gemini" and "The Madman (Running Through The Fields)."
The fifth and final disc of this box set is the rare mono version of the Eric Burdon & The Animals album "Winds Of Change." Also included is an illustrated booklet with a new essay and replica poster. To find out more about the new Eric Burdon & The Animals box set "When I Was Young: The MGM Recordings 1967-1968," please visit cherryred.co.uk.
Posted by JP's Music Blog