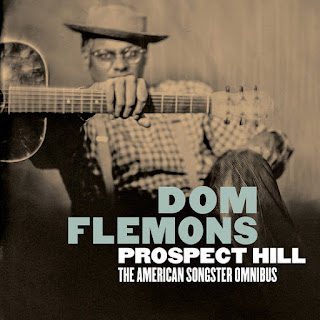 Grammy-award winning artist Dom Flemons is having his third solo album "Prospect Hill" reissues by Omnivore Recordings on February 28th. The new release titled "Prospect Hill: The American Songster Omnibus" features the original 14-track album on one disc, accompanied by a second disc which features his 2015 Record Store Day release "What Got Over" and 12 previously unreleased instrumental tracks titled "The Drum Major Instinct."

Dom Flemons was an original member of the highly successful folk trio, Carolina Chocolate Drops between 2005-2013, before leaving the band and releasing the album "Prospect Hill." Flemons is known for his unique style of bringing the classic, turn-of-the-century folk storytelling, mixed with blues and country rhythms, giving his sound a more modern feel.
If you haven't heard Flemons' "Prospect Hill" album, this is the perfect opportunity to dive right in. It showcases all of his many different sides, including the playful cover of "But They Got It Fixed Right On" and the deep, dark bluesy sound of the "Georgia Drumbeat." You will truly appreciate his songwriting on the gentle, acoustic strumming tale of "Too Long (I've Been Gone)" and the wonderful fun of "Hot Chicken" and on the finger-picking strings of "My Money Never Runs Out."
The vinyl-only release of his EP "What Got Over" will see its debut on CD (and digitally) with this set. It features nine tracks, which feel like an extension of the "Prospect Hill" album. The classic swinging string instrumentation of "Milwaukee Blues" is a contrast to the modern blues romp of "Clock On The Wall," which displays Dom's many different sides to his music. The EP also included a number of alternate versions of songs that appeared on the "Prospect Hill" album, like "Hot Chicken," "Have I Stayed Away Too Long?" and "'Til The Seas Run Dry."
The second half of the second disc feature a dozen previously unreleased tracks, which feel like rehearsals or experimental backing rhythms. Many of them are different drum tracks, some paired with flutes ("Grotto Beat") and some paired with acoustic guitar ("Georgia Drumbeat"). Some tracks also feel fully complete, like "Clock On The Wall," which actually may be more enjoyable without the vocals. The wonderful finger-picking of "The Grand Manifesto" and "Blue Butterfly" end the release on an ear-pleasing high note, which will only have you wanting more from Dom Flemons. He is currently on tour in the U.S. For a complete list of shows, please visit Dom's website theamericansongster.com. To find out more about the new reissue of his album "Prospect Hill," please visit omnivorerecordings.com.
Posted by JP's Music Blog