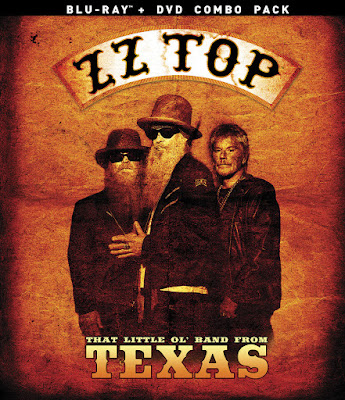 Arriving February 28th on DVD, Blu-ray and digitally from Eagle Rock Entertainment is the new ZZ Top documentary "That Little Ol' Band From Texas." This is the first time that the complete story of the band has been told by the members, Billy Gibbons, Dusty Hill and Frank Beard. The 90-minute film has some of everything in it like, classic live footage, guest interviews, tons of unpublished photos and to top it all off, a live jam session of the band performing many of their classic tunes.

The documentary, produced by the award-winning Banger Films, is broken up into different chapters of the band's career, beginning with the band's origins of how the three members came into each others graces. The film touches upon each of their early bands and highlights with Billy Gibbons' band, The Moving Sidewalks, opening for the late, great Jimi Hendrix.
The film comically touches upon one of ZZ Top's first shows, where there was only one member in the audience and they played a complete show and an encore for just one person. Then, the band jumped into an opening slot for The Rolling Stones, before finally headlining their own tour.
A year-long hiatus took ZZ Top's music in different directions, changing their pure blues-rock sound to a more modern, new wave rock approach to their music. Their time apart also produced the band's iconic look of two bearded front men, which has stuck with them to this day. Also, the discovery of MTV turned ZZ Top into a household name with their music videos, filled with cars, girls and undeniably catchy songs.
Throughout the documentary, there are appearances from Billy Bob Thorton, Steve Miller, Joshua Homme and many other producers and directors that have been influenced by the band or have had a hand in continuing the band's long road to success. The film only reaches the high point of the band's commercial success in the eighties, as they have continued to make more amazing music for the next three decades.
The bonus performances are will you re-discover how seeped into the blues ZZ Top's music is. The two live jam sessions are where the band excel, as they just play music. No audience, just three guys who are the best at what they do. To find out more about the new ZZ Top documentary "That Little Ol' Band From Texas," please visit zztopfilm.com.
Posted by JP's Music Blog