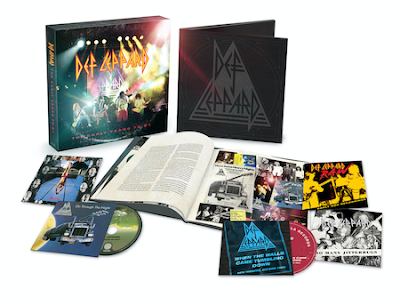 British rockers Def Leppard dug deep into their vault for their latest release, the five-CD box set "The Early Years 79-81," which was released on March 20th through UMe/Virgin. Instead of releasing two individual deluxe editions of their first two albums ("On Through The Night" and "High 'N' Dry"), they packaged it all up in this nice, concise set. These two early albums showcase a different side to Def Leppard, before they became megastars with the release of the "Pyromania" album in 1983.

Fans of the band's first two albums will surely love this new box set. The "On Through The Night" and "High 'N' Dry" albums have both been remastered and sound simply amazing. The "On Through The Night" album has a deeper bass sound and feel more in-tune with the rest of the band's catalog. The "High 'N' Dry" album always sounded good in my opinion and may have only needed some slight adjustments. Both of these albums have also been released (in their remastered form) on colored vinyl for the very first time. This is the perfect addition to any Def Leppard vinyl collection.

Now, for the really good stuff. This new box set contains a concert recorded live at the Oxford New Theatre on the band's first U.K. tour in 1980. First off, it sounds amazing, especially given the fact that it was recorded over 40 years ago and has never been professionally touched, until now. Every song from their debut album is played live and this show single-handedly proved why Def Leppard were considered one of the premier bands of the New Wave Of British Heavy Metal in the early eighties. The show includes an early version of "Let It Go," which was originally called "When The Rain Falls" with an entirely different set of lyrics. They also perform "Lady Strange," which will also be featured on their follow-up album "High 'N' Dry."

Another disc in this set is made up of single edits, B-sides and rarities, beginning with Def Leppard's debut, 3 song EP, which included "Ride Into The Sun," which never appeared on a full-length Def Leppard album. Other exciting gems on this disc are early versions of "Hello America" and "Rock Brigade" which were produced by Nick Tauber. What some of these early singles and original versions show is how good the new remastered versions of the albums sounds, as some of these songs contains less punch. One of the personal highlights is the original versions of "Me And My Wine," which just feels raw and more aggressive than the remixed version that appeared on later versions of the "High 'N' Dry" album.

The final disc in this set has a couple of early BBC sessions from 1979 that show a band ready to explode onto the music scene. Their live, in-session version of "Wasted" is filled to the brim with punk-like energy. The set closes with a five-song set from the 1980 Reading Festival, which also sounds great given its age. Def Leppard blast through their set at a whirlwind pace and once again show what they were on the verge of becoming. The only thing missing from this set is a full show from their "High 'N' Dry" tour. Keep your fingers crossed for a possible future release. To find out more about the new Def Leppard "The Early Days 79-81" box set, please visit defleppard.com.
Posted by JP's Music Blog