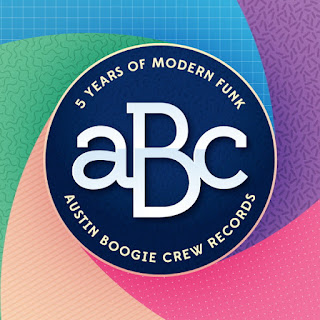 Austin Boogie Crew Records (ABC Records) recently released a new compilation from their unique family of artists. The new album titled "5 Years Of Modern Funk" features twenty-one tracks that look to bridge the gap between the new wave of modern funk artists and the legends who brought upon the first wave of boogie funk.

The set start off with Diamond Ortiz and his bass-heavy track "Goodies," which was originally released in 2017, but sounds like it came straight from the disco clubs of the seventies. Next, Solar Shield gets in the act with a couple of compositions, the dance beats of "Reesis" will get your body moving, along with the nostalgic feel of "Beeturia." Soul singer Rojai lays down his full-on funk groove with "So Special," while Trailer Limon slows the tempo down for the R&B flavor of "Dancing With Somebody." The more modern sounding XL Middleton hits all the right marks with the addictive pop melody of "Nervous" and "Digital Devils."
The compilation jumps back in time with the exciting, addictive touch of "A Good Time" and "Just Want To Love Ya," as you'd think you went back in time to find these treasures. The electronic beats of "Closer" from Moniquea shows us the other side of manufacturing a funk sound, before the album closes with the jazzy feel of Jonny Tobin with "Sunrise" and the classic sounding funk of "Ear To Ear" from ABC Records founder Spence. To find out more about this exciting new compilation from ABC Records, please visit austinboogiecrewrecords.bandcamp.com.
Posted by JP's Music Blog