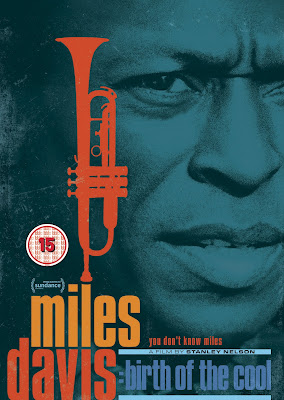 Arriving April 10th from Eagle Rock Entertainment and American Masters Pictures is "Miles Davis: Birth Of The Cool." This new documentary will be available on Blu-ray, DVD and digitally, all with bonus concert footage from Davis performing at Montreux. The film footage contains loads of classic clips from the Miles Davis Estate, directed by three-time Emmy Award winner Stanley Nelson.

The voice-over throughout the film is supplied by Carl Lumbly, as he speaks the words of Miles Davis. His raspy voice feels perfect for the role, as Davis' own voice contained a growl which was caused by a tumor on his vocal chords. This two-hour film does a excellent job touching upon major moments in Davis' life, from meeting and performing with Dizzy Gillespie and Charlie Parker to creating new plateaus in jazz music with the albums "Kind Of Blue" and "Bitches Brew."
Not only does the film show all of Davis' magic in the studio, creating timeless music, but it also gives us more of an insight, (more than any other film) into Davis' lifestyle outside of jazz music. Many fellow musicians, lovers and friends give exclusive interviews into what Miles Davis and his music had meant to them, including his early loves, French actress Juliette Greco and dancer Frances Taylor.
The eye-opening thing about this new documentary is how much he abused drugs, in order to cover his feelings. Miles' lifestyle was not easy, everyone wanted a part of him and his music, but he also had an attitude that he was better than everyone else. Miles Davis' playing was magical, as fellow bandmates Herbie Hancock and Wayne Shorter tell wonderful stories about playing and recording with Miles Davis.
Some of the best footage in this documentary, showcases Miles Davis' rebirth into modern jazz music in the eighties, as he plays alongside pop artists like Prince and Carlos Santana. The film carefully covers Davis' final days, performing with Quincy Jones at Montreux, before going into the hospital and passing from a massive stroke. This documentary is the perfect gateway into the wonderfully amazing world of Miles Davis' music.
As a bonus to this new film is a 75-minute "All Live From Montreux" DVD that features three different performances. It first starts off with the 27-minute, improvisational jazz piece "Ife" from his appearance in 1973, before jumping ahead a decade with two shows from the 1980's. Davis' 1984 and 1985 shows seem like he steps back into a more classic jazz performance, with a stellar backing band that follows his every move perfectly. To find out more about the new "Miles Davis: Birth Of The Cool" documentary, please visit milesdavis.com.
Posted by JP's Music Blog