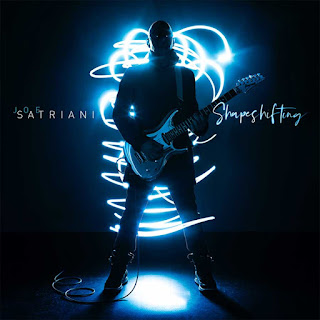 Guitarist extraordinaire Joe Satriani recently released his new studio album "Shapeshifting" on April 10th. Unfortunately, due to the recent worldwide pandemic, Satriani has had to reschedule his tour to a later date, but that only gives his fans more time to dive into his new solo release. Supporting Satriani on his new album is Kenny Aronoff, Chris Chaney and Eric Caudieux, with guest appearances by Lisa Coleman of The Revolution and actor/musician Christopher Guest.

Joe start off his new thirteen-song release with the title-song "Shapeshifting," which finds him locking into a sweet classic rock groove with a steady rhythm section giving him support in the background. He follows that up with a fatter guitar sound on "Big Distortion," which has a bit of rockabilly flair, while "All For Love" carries a slower, bluesy flow, filled with emotional guitar playing. The light-hearted country feel of "Perfect Dust" finds Satriani laying down an addictive pop melody swinging with energy and excitement.
The album's lead single "Nineteen Eighty" displays a sweet retro-rock vibe, as Joe Satriani pays tribute to early days of power rock, when lead guitarists were just as exciting (and more popular) that the frontman. He slows down for the R&B-flavored adventure of "Falling Stars" and the quieter, emotional soundscape of "Waiting," before finishing off his new album with the back porch country twang of "Yesterday's Yesterday." To find out more about Joe Satriani, his new album "Shapeshifting" and the rescheduled dates of his tour, please visit satriani.com.
Posted by JP's Music Blog