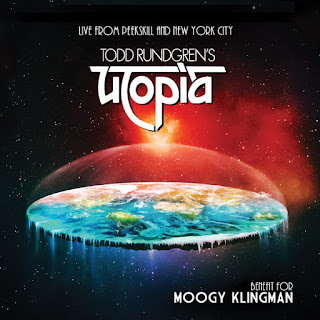 Back in the late 1970's, guitarist/singer/songwriter Todd Rundgren left his solo career behind to create the progressive rock outfit, Utopia. They had a top 40 hit in 1980 with the song "Set Me Free," before disbanding in 1986. One of the original members of Todd Rundgren's Utopia was musician Mark "Moogy" Klingman, who also played on a number of Rundgren's solo albums.

Back in January 2011, Todd Rundgren reunited Utopia for a benefit show at New York's Highline Ballroom to help "Moogy" Klingman with his surmounting medical bills. As Kingman's health began to deteriorate, Rundgren felt it necessary to perform another benefit show in November of that same year. Unfortunately, "Moogy" Klingman passed away days before the band's November 18th performance at the Peekskill Performing Arts Center. On May 1st, a six-disc box set featuring video and audio from both of those shows are being released through Purple Pyramid (Cleopatra Records) as "Benefit For Moogy Kilingman."
Each show contains many of the same classic Utopia songs like "Set Me Free," "Freak Parade" and "Another Life," but the synthesizer magic of Moogy Klingman is definitely present in the January show. Song's like "Moogy's Boogie," "Lady Face" and "Sons Of 1984" showcase Klingman's talents, as he adds his own special touch to each and every song he performed. Highlights from each show is the extensive jam of "Utopia Theme," as the band comes together on this nearly fifteen-minute prog-rock opus. Another great musical piece from each night is the intense build-up of "Freak Parade," which fully showcases even more of the band's progressive side. Their raw, energy fueled a cover of "Do Ya" which is a must hear, as the full-on rock and roll power of Todd Rundgren's Utopia is felt in the band's passion for this live performance. The set closes with Utopia playing one of Moogy's favorite songs, "Just One Victory," as Rundgren puts all his passion for performing into this emotional defining moment. To find out more about this new "Benefit For Moogy Klingman" from Todd Rundgren's Utopia, please visit cleorecs.com.
Posted by JP's Music Blog