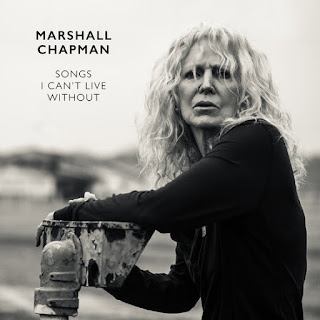 Independent music artist Marshall Chapman is preparing to release her 14th album titled "Songs I Can't Live Without" on May 15th. This new set of covers allows Chapman to add her own special touch to some of her all-time favorite songs, with the help of Will Kimbrough, Dan Mitchell and Neilson Hubbard (who also produced the album).

Five years ago, Marshall Chapman was at a crossroads with her music career, she "retired from making music" and turned to movies. She played a blues-singing mother of a gambler-drifter played by Ryan Reynolds in "Mississippi Grind" and was asked to perform a song for the soundtrack, which was being produced by Hubbard. It was then suggested by Hubbard to record an entire album together and the result is Chapman's new album, "Songs I Can't Live Without."
The album begins with the dark, bluesy vibe of Leonard Cohen's "Tower Of Song," which fits Chapman's weathered vocals perfectly. The delicate touch of Bob Seger's "Turn The Page" carries a country tone, as you believe every word that Marshall Chapman sings as if they were her own. She stays in the country mood with a quiet, gentle acoustic version of Johnny Cash's "I Still Miss Someone," which is performed beautifully. Next, she pulls the blues out of "Don't Be Cruel," before finishing her new album with a raw, genuine cover of J.J. Cale's "After Midnight" and the traditional gospel sing-along "He's Got The Whole World In His Hands." To find out more about Marshall Chapman and her latest release "Songs I Can't Live Without," please visit tallgirl.com.
Posted by JP's Music Blog