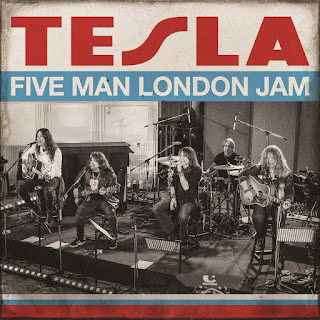 Thirty years ago, American rock band Tesla did one of the most unconventional things, by recording and releasing an all-acoustic live show titled "Five Man Acoustical Jam." It helped catapult the band into super-stardom with their cover of "Signs" and their loose renditions of fan favorites like "Gettin' Better" and "Modern Day Cowboy." The album also inspired many other rock acts to play their songs "unplugged."

Now, in honor of that 1990 platinum-selling album, Tesla decided to record an updated version of that album at Abbey Road Studios and call it "Five Man London Jam." This new thirteen-song set brings back many of the classics from the "Five Man Acoustical Jam" album, along with songs from their more recent studio albums "Into The Now" and last year's "Shock" album.
They begin their new live recording the same way as the original, with the medley opener "Comin' Atcha Live/Truckin'," which sets the stage perfectly for what's to come from this new live recording. They dive right into the "Shock" album with an acoustic version of "Tied To The Tracks," which fits in perfectly, alongside their cover of The Beatles' "We Can Work It Out" and their spot-on rendition of "Signs." The acoustics sound simply magical on the vinyl version of this set, along with singer Jeff Keith's vocals which still sound timeless, even thirty years later.
The acoustic rendition of one of their newest song "California Summer Song" feels loose and free with a country vibe, along with a reworked version of "Miles Away," which still captures the energy of the original, with its thumping bass line. Two of the epic pieces that are must hears on this new album is their version of the beautiful ballad "Paradise" and the electrifying album closer "Love Song." I only wish there was more banter between songs, but the selections picked for this new album are perfect for this modern acoustic jam.
This new release is available now in a number of different formats, including CD, Blu-ray, vinyl and also as a limited edition red and blue colored double-vinyl set. To find out more about Tesla and their latest release "Five Man London Jam," please visit teslatheband.com.
Posted by JP's Music Blog