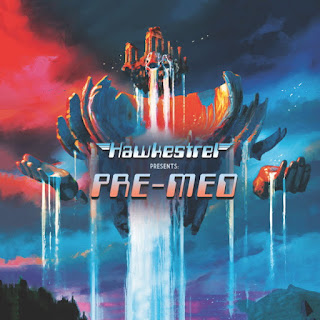 Thirty tracks make up this set, beginning with their 2006 album "Medication Time." It showcases the band's experimental side, featuring the heavy metal energy of "Up All Night," along side the swirling space rock of "No Smoking." The musicianship on songs like "Man Eggs From Mars" and "Once Upon A Line" is simply amazing and will turn you into an instant fan of the music of Pre-Med.
Their second album, 2008's "The Truth About Us" begins with the intense rocker "Cerebral Escape," which leads the way to the more keyboard and guitar collaboration of "Wallpaper Warriors." Pre-Med have that classic metal sound working during the steady pace of the nearly seven-minute "The Crowning Of The Acid King," while "Death Of A Star" displays a more melodic tone to their progressive side. The experimental soundscapes are less present on this album, but the closing song "Debouch" does showcase the band's electronic sound.
After a five year break, Pre-Med returned with their 2013 release "Einstein's Day Off," which combines all of the elements of space, hard and industrial rock on this album, beginning with the high energy of "Bang Goes The Theory." Their heavier sound has a more mainstream appeal with songs like "Fear Is Temporary" and "The Stargazer's Apprentice," while "Energise" is a pure sonic blast of hard rock energy. Pre-Med save their experimental, ambient sound for the final track, the spaced-out synthesizer of "The Event Horizon." The "Hawkestrel Presents Pre-Med" set was released May 8th through Purple Pyramid Records (Cleopatra Records) and is available at cleorecs.com.
Posted by JP's Music Blog