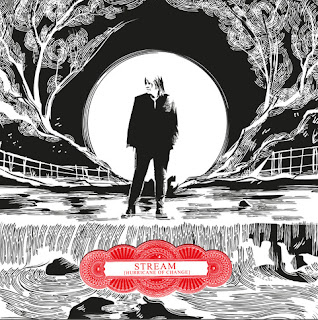 Arriving June 12th is the brand new double album from Mike Peters, singer and guitarist for the classic Welsh rock band, The Alarm. Peters' new album titled "Stream (Hurricane Of Change) is broken down into two acts, the "Downstream Act One" and the "Upstream Act Two," in which he tells his autobiographical tale with words and music.

Act one begins with a mix of words and music as Peters' reads exerts from his story that he lived with The Alarm between 1986-1990. The songs are just as powerful as his words, beginning with the passionate, acoustic tale of "A New South Wales" and the more aggressive folk/rock energy of "New Town Jericho." Mike Peters can't help but write addictive pop melodies as with "Ghost Of Rebecca," as he continues the story of his early days of his Welsh upbringing. The energy picks up with the fuzzed-out rocker "Hallowed Ground" and the bluesy explosive vocals of "Shelter." Peters goes all out with the emotional ballad "Rescue Me," which leads up to the addictive chorus of "Only Love Can Set Me Free" and the pounding rock rhythm of "Permanence In Change." Mike Peters closes out the first disc with the simmering ballad "Presence Of Love" and acoustic folk strumming of "Elders And Folklore."
Act two begins with the more energetic delivery of "Where A Town Once Stood" and the post-punk rawness of "New Frontiers." Many of the songs on the second disc are shorter acoustic excerpts, while other songs like "Sold Me Down The River" and "Devolution Working Man Blues" show that Mike Peters can still rock out with the best of them with these new high-powered anthems. The addictive pop melody of "The Rock" and the modern sounding, southern rock of "Change" showcase the creative force behind this musical genius. To find out more about the new double-album "Stream (Hurricane Of Change)" from Mike Peters, please visit thealarm.com.

The Alarm themselves are planning on special vinyl release for Record Store Day this year featuring previously unreleased live recordings from their 1988 "Celtic Folklore Tour." The new release titled "Celtic Folklore Live" will be available on one of the newly announced Record Store Days in either August, September or October. Stay tuned to recordstoreday.com for updates.
Posted by JP's Music Blog