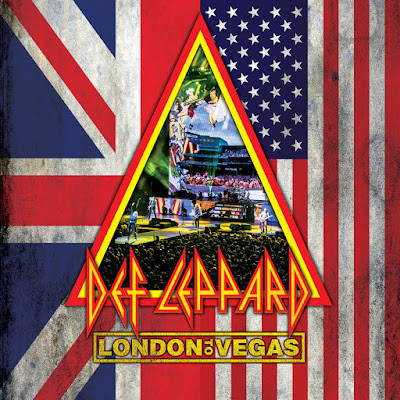 A brand new live video, CD and vinyl arrives May 29th from the immortal rock band, Def Leppard. The new release titled "Def Leppard: London To Vegas," finds the band performing their top-selling album "Hysteria" live for their hometown crowd at London's O2 arena. Then the second part finds the band back in Las Vegas, following their induction into the Rock And Roll Hall Of Fame for a new residency at Zappos Theatre in Planet Hollywood. This show covers some of the band's greatest hits, as well as some deep cuts.

The "Hysteria At The O2" concert was filmed in December of 2018, at Def Leppard's debut appearance at the arena. The filming is stellar and tries to get every member of the band involved, while also capturing glimpses of the sold out crowd, loving their British boys. By now, the "Hysteria" album is so well-known to fans, that they can pretty much recite the whole album, but to watch it performed live, brings the energy to another level. The first three tracks ("Woman," "Rocket" and "Animal") may be the best trilogy of songs that Def Leppard have ever recorded and they start the show off perfectly, showcasing the giant stage and screen. The boys are all business as they perform the album to a "T," still sounding timeless and passionate about their music. The London show is well crafted and sounds amazing on this newly released documentary of the concert. Def Leppard close out the London show with some sweet rarities, like "Wasted" and fan favorites like the iconic "Photograph."

Just last year, Def Leppard returned to Las Vegas for their second residency, but instead of performing the "Hysteria" album in full, they performed an enormous 28-song set. The hits were still their from the "Hysteria" and "Pyromania" albums, but fans will really get into the deep cuts that the band usually doesn't perform on a regular tour. The first thing you may notice when viewing the concert film "Hits Vegas, Live At Planet Hollywood" is how huge the stage is. It was specially built for the band for this residency and is equipped with bigger screens, lasers, lights and more. It also allows for the camera crew to capture every angle of the band, and they certainly do. Songs like "Billy's Got A Gun," "Too Late For Love" and "Paper Sun" sound refreshed and energized in this new live setting. The highlight is seeing the band perform an "unplugged" acoustic set with some rarities like "Let Me Be The One" and "We Belong" next to the classic ballads "Two Steps Behind" and "Have You Ever Needed Someone So Bad."

The bonus sections of both shows features a short behind the scenes documentary that gives a little insight into the creation of the these two great concerts. These concerts will be available as a double Blu-ray/2 CD set or double DVD/2 CD set, as well as stand-only copies that only feature the "Hysteria At The O2" show. Also available is a clear, double-vinyl release of Def Leppard performing "Hysteria" live at the O2 and a picture disc featuring the four-song acoustic set from Las Vegas. To find out more about the new Def Leppard concert documentary "London To Vegas," please visit universalmusic.com.
Posted by JP's Music Blog