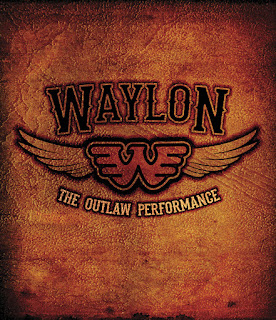 Arriving May 15th is a new concert experience from the legendary country artist Waylon Jennings. His new film titled "The Outlaw Performance" was documented at a sold-out performance at the Opry House in Nashville, TN in 1978. It features a young, strong Waylon Jennings and his band performing a sixteen song set, which includes many of his #1 the classics like "Amanda," "This Time" and "Good Hearted Woman."

This concert finds Waylon Jennings in his prime, as his voice is stellar and his band is outstanding. What makes this concert performance film different, is Waylon's voice overs during the performance of songs, telling stories of being roommates with Johnny Cash, falling in love with his wife Jesse and playing cards with Willie Nelson. Waylon's stories are just as timeless as his music, as you will feel that everything's gonna be alright, listening to songs like "Mammas Don't Let Your Babies Grow Up To Be Cowboys" and "Are You Sure Hank Does It This Way."
The quality of the footage is what you would expect from a video of a show from 1978. It's not in high quality, but it gives you that nostalgic touch which makes watching this film extra special. One of the best parts about this new release is during the film credits, when Waylon plays an acoustic instrumental, while you also see him giving us his heartfelt goodbye.
The bonus features on this new concert documentary features the entire show without Waylon's voice overs and a special 1990 interview segment titled "Friends Remember The Outlaw." It includes interviews with George Jones, Johnny Cash and Willie Nelson, as well as Waylon's longtime drummer Richie Albright talking about the aritst. To find out more about "Waylon Jennings: The Outlaw Performance," please visit amazon.com.
Posted by JP's Music Blog