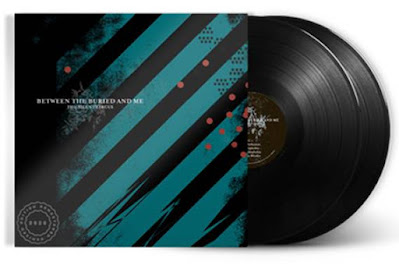 Craft Recordings continues its mission of reissuing albums from Between The Buried And Me onto vinyl. The latest one covers the band's sophomore effort, "The Silent Circus," which was originally released back in 2003. This new vinyl reissue features a newly remixed and remastered version of the album by the band's longtime collaborator, Jamie King.
Between The Buried And Me took their music to another level, with the opening heavy attack of "Lost Perfection A) Coulrophobia" and the equally aggressive "B) Anablephobia." The band's intensity rises to the boiling point with the chaos with "Mordecai," while "Reaction" and "Shevanel Take 2" display a softer, more melodic tone their hardcore metal sound. Speaking of sound, this new vinyl reissue delivers an amazing range of dynamics, as the new remix seems to modernize the band's sound by strengthening the guitar riffs, while maintaining the perfect balance of power and energy. The solid rhythmic pounding of "The Need For Repetition" will certainly shake your speakers.
The new vinyl reissue of Between The Buried And Me's album "The Silent Circus" will be available on July 31st as a black double-vinyl set or an exclusive colored double-vinyl set from merchconnectioninc.com. To find out more, please visit craftrecordings.com.
Posted by JP's Music Blog