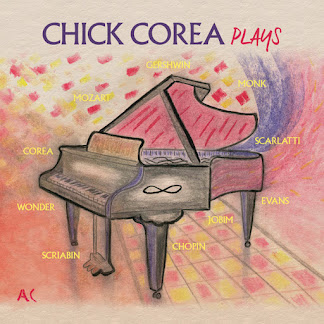 Jazz piano legend Chick Corea is preparing to release a new, intimate live album title "Plays." On this new release, Corea shows us the lineage from timeless classical artists like Mozart and Chopin, to jazz greats like Thelonious Monk and Antonio Carlos Jobim right up to his own compositions. The recording features just Corea and a piano as he begins with the similarities of Mozart's "Piano Sonata" and George Gerswin's "Someone To Watch Over Me," as Corea flows one melody into the next. He describes his love for Bill Evans and Antonio Jobim, before comparing the compositions "Waltz For Debby" and "Desafinado." Chick Corea closes out this first disc of the 2 CD set with a tribute to Thelonious Monk, as he performs a trio of songs, "Pannonica," "Trinkle Tinkle" and "Blue Monk."

The second disc begins with a solo piano rendition of Stevie Wonder's "Pastime Paradise," before Chick talks about his collaboration with the great Paco de Lucia on the song "The Yellow Nimbus." You can feel Corea pouring his emotions into the nearly ten minute piano jazz piece, before describing his "family portraits" and "duets" that Chick used to perform with his family at gatherings. The set closes with Chick Corea revisiting his "Children's Songs," which he wrote and recorded back in the late-seventies and early-eighties. You can definitely hear the lighter side of the music, as Corea simplified his extraordinary talents for children to understand the music being performed. This new solo piano set from Chick Corea titled "Plays" will be available on September 11th, as a 2 CD set or as a 3 LP vinyl set. To find out more about it, please visit facebook.com/chickcorea. 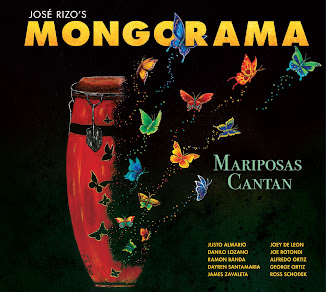 Long-time disc jockey Jose Rizo collected an all-star cast of musicians to perform his latest set of compositions titled "Mariposas Cantan." Rizo's band, Mongorama has been around for almost a decade now and this latest twelve-song set brings to life the Latin Jazz music that Rizo has been promoting on his long-running "Jazz On The Latin Side" radio show." The album begins with the rhythm fueled "Mambo Mindoro" and the upbeat vibe of the title track "Mariposas Cantan," featuring the stellar lead vocals of James Zavaleta. The energy keeps on flowing with the salsa swing of "Helen Of Jazz," before the sultry sway of "A Little Dab'll Do Ya" just relaxes your senses Jose Rizo's Mongorama adds a bit of Latin flair to the timeless Herbie Hancock song "Watermelon Man," before finishing their new album with the fun, exciting, eight-minute adventurous jazz piece "Descarga Ramon Banda" and a return to the rhythmic flair of "East L.A. Meets Napa." To find out more about Jose Rizo's Mongorama and their latest release "Mariposas Cantan," please visit saungu.com.
Posted by JP's Music Blog