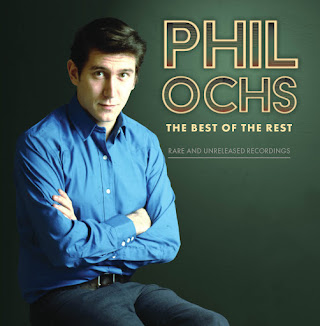 American singer/songwriter Phil Ochs was one of the biggest names in political music during the sixties and seventies. His music was comparable to other folk legends like Bob Dylan and Joan Baez, while his lyrics rang truthfully about the state of the U.S. government during these troubling times. Ochs life ended much too soon, as his excessive drinking lead to his paranoia and eventually his suicide in 1976. A newly released compilation titled "The Best Of The Rest: Rare and Unreleased Recordings" further enhances the political draw that Phil Ochs sang about in the folk anthems "Days Of Decision" and "City Boy."

The majority of the songs on this new compilation were taken from his mid-sixties album "I Ain't Marching No More" and the 1986 compilation "A Toast To Those Who Are Gone," which was also made up of songs recorded during Phil Ochs' period between album contracts. This new "Best Of The Rest" release also contains some previously unreleased gems, like the war march of "Sailors And Soldiers" and the more intimate story of "I Wish I Could Have Been Along." Phil Ochs' vocals are truthful and strong during these stark sessions, which allows you to concentrate strictly on his powerful words. The new set closes with more previously unreleased tracks, like the gentle poetic flow of "All Quiet On The Western Front" and a raw, rehearsal of his anthem "No More Songs," as you hear Phil guiding his way through this early take of the song. To find out more about "The Best Of The Rest: Rare and Unreleased Recordings" from Phil Ochs, please visit mvdshop.com.
Posted by JP's Music Blog