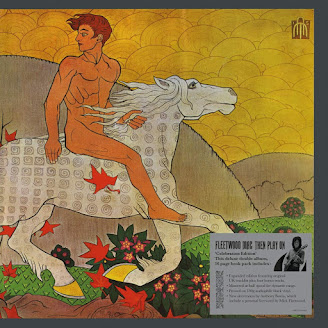 On September 18th, BMG will release a new "Celebration Edition" of Fleetwood Mac's third studio album "Then Play On." Back before Fleetwood Mac became a hit making machine in the seventies and eighties, they were a blues band with one of the best blues rock guitarists to come out of England, Peter Green. This album was originally released back in 1969 and the last Fleetwood Mac album to feature Green. He left the band after Fleetwood Mac completed their 1970 tour behind the "Then Play On" album. Peter Green passed away in July of this year at the age of 73.

The new expanded release of the album features four bonus tracks and new liner notes from Anthony Bozza and Mick Fleetwood. It will be released as a double-LP set and on CD, along with a sixteen page booklet. This release is also a prelude to the upcoming concert film "Mick Fleetwood And Friends Celebrate The Music Of Peter Green," which will be released later this year.

BMG has used the original UK line-up of songs for this release, which included the tracks "One Sunny Day" and "Without You." The four bonus tracks included in this new release are part one and two of their first US hit single "Oh Well," along with Peter Green's signature track "The Green Manalishi (With The Two Pronged Crown" and it's original B-side "World Of Harmony." Make sure you rediscover the roots of Fleetwood Mac's blues side with this new "Celebration Edition of their 1969 album "Then Play On" and relive some of the best songs featuring the legendary Peter Green. To find out more about this new, upcoming release, please visit mfaf.tmstor.es.