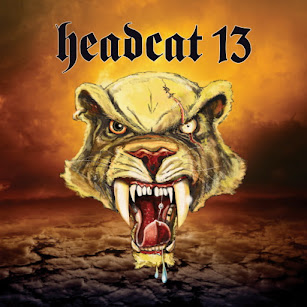 Back in 2006, heavy metal legend Lemmy Kilmister (Motorhead) teamed up with rockabilly icons Danny B. Harvey and Slim Jim Phantom (Stray Cats) to form The Head Cat. Now, fourteen years later, the dream still lives on, as Headcat 13. Danny B. Harvey is now leading the way, along with Hawkwind bassist and Lemmy protege, Alan Davey and drummer Paul Vezelis (Frantic Flattops). The new self-titled Headcat 13 album was released back in July and features a mix of originals with some timeless rockabilly numbers like "Route 66" and "Whole Lotta Shakin' Going On."

The album kicks off with the high-energy, pedal-to-the-medal rocker "Let's Go Crazy," which is also the first single from the album. The spirit of the original Head Cat band is alive and well with the swinging songs "Somebody's Gonna Get Their Head Kicked In Tonight" and "That's It That's All." The raw energy of "Reckless, Wild And Crazy" is a testament that this isn't your dad's rockabilly, as the music just hits you in the face like a freight train. Headcat 13 wrap up their new album with the southern swagger cover of "Susie Q" and the gritty, powerfully addictive duet of "Whole Lotta Shakin's Going On," featuring Jerry Lee Lewis' niece, Annie Marie Lewis on vocals. To find out more about the new Headcat 13 release, please visit cleorecs.com. 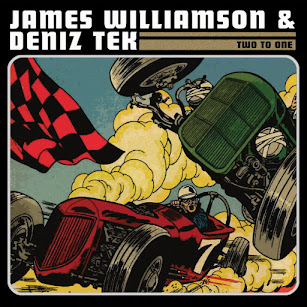 The Stooges' James Williamson has teamed up with fellow proto-punk hero Deniz Tek for a new studio album titled "Two To One," which will be released on September 18th through Cleopatra Records. The new eleven track release explodes with the lead-off track "Jet Pack Nightmare," as you instantly love the idea of these two legends in punk joining forces. The raw energy continues with "Progress" and "Good As Gone," which carries a nostalgic early punk vibe. The album's lead single, "Stable" is a guitar-driven romp, smoldering with attitude, just like The Stooges's music. Williamson and Tek even sing about political issues like "Climate Change," before finishing their new album with the simple, striking message of "Liar" and the classic sounding, straight-up rock and roll of "Melissa Blue." To find out more about this new collaboration between James Williamson and Deniz Tek, please visit cleorecs.com.
Posted by JP's Music Blog