Explore New Music From WorldService Project, Along With The Trio of Merzbow, Gustafsson & Pandi 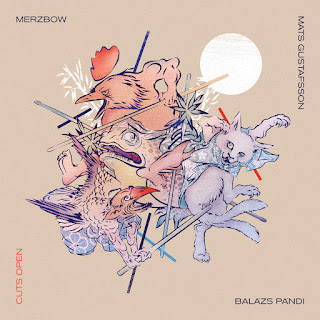 What do you get when you combine a legendary Japanese noisemaker (Merzbow), a Swedish saxophonist (Mats Gustafsson) and a Hungarian drummer (Balasz Pandi)? The answer is the latest album titled "Cuts Open" from this experimental jazz fusion trio. This new 2 CD set arrived September 25th through RareNoise Records and features only four songs, but each one is an epic adventure into sound, as the musicians keep you guessing which direction to follow and what comes next. All of the music was created during one long session on June 18, 2018 and is hard to describe, as the two twenty-three minute tracks that take up the first disc is filled with guitar feedback, subtle touches of the cymbals and aggressive squeezes saxophone notes.

The second disc begins with drummer Balasz Pandi feeling his way around the kit during, combining together any rhythmic pattern, as the music sort of just hangs in the air for the musicians to just grab hold and control it. The final track is an intense noise collage that sounds like the complete opposite of the song before, with each musician fighting for dominance in the studio during this recording. To find out more about this latest release Cuts Open from Merzbow, Mats Gustafsson and Balasz Pandi, please visit rarenoiserecords.com. 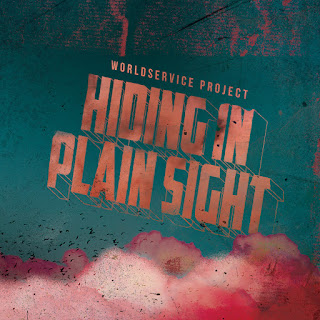 Another new arrival this month from RareNoise Records comes in the form of the free-form jazz/rock outfit, WorldService Project. Their new release titled "Hiding In Plain Sight" is the band's fifth studio project and fully captures the band's unique sound on nine new tracks. They begin with high energy of "Deeper," which feels less like jazz and more like progressive rock, while "Pumped-Up Freddie" is pure jazz fusion with experimental jam stamped all over it. WorldService Project mechanically build up the intensity of "Sex, Lies, Lies and Lies," as a preacher lays down the final word (in Italian). The music gets more funky on the keyboard frenzy of "The Kipper And The Pork Pie," before the album closes with the eclectic jazz flow of "Europhiles" and the slow-building, graceful melody of "Onward." To find out more about WorldService Project and their latest release "Hiding In Plain Sight," please visit rarenoiserecords.com.
Posted by JP's Music Blog