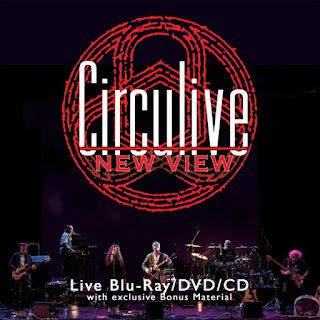 Arriving in just over a month from now, on October 9th is the new live release from the rising progressive rock band, Circuline. This six-piece band is one of the rising forces in music, performing at numerous rock festivals throughout their short five year career and are now ready to explode onto the music scene with their latest release "New View." It was recorded live at the ProgStock Festival in New Jersey on October 14th, 2017. The album features a dozen songs and comes in a deluxe CD/DVD/Blu-ray set that not only captures the music but the visuals of this amazing prog-rock band.

After a short introduction by the band's manager, things quickly get underway with the rising force of the short instrumental "Soleil Noir." The duel vocals and sonic guitar attack of "One Wish" (from the band's first album)" will have you instantly taking notice of this band. The intensity continues with the thematic delivery of "Nautilus," while the ten-plus minute "Hollow" takes you on a sonic adventure with lead singer Natalie Brown becoming your tour guide. After the acoustic, folk ballad "Return" by fellow lead singer/guitarist Billy Spillane, Circuline delivery the epic, sweeping masterpiece "Forbidden Planet," which finishes with some exceptional drum work from Darin Brannon. The show finishes with the extended jam of "Summit," lead by keyboard wizard Andrew Colyer, before closing with the powerful rock approach of "Stereotypes."

The DVD & Blu-ray are also a great addition to this new release as you can visually see this amazing music being created by these six individuals working together as a complete unit. You will simply be mesmerized by the sounds of Circuline on this new live release. To promote their new album, Circuline will be conducting a new view virtual tour showcasing the video side of this upcoming release. To find out more about Circuline and their new album "New View," please visit circulinemusic.com.