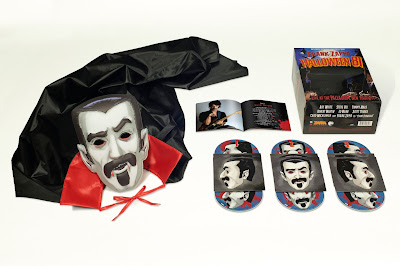 Halloween comes early once again for Frank Zappa fans with the October 2nd release of his 1981 Halloween shows from The Palladium in New York City. By 1981, Zappa's Halloween concerts have become legendary and this new six-disc box set from Zappa Records/UMe is another pinnacle mark in the amazing career of Frank Zappa. This new set features three full-length shows (two from Halloween night and one from November 1st). The two Halloween shows (8pm & 12am) were recorded for home video and to be broadcast live on MTV, respectively.

Frank Zappa's band at this time sound in perfect form, running through a songs like "Dumb All Over," "Heavenly Bank Account" and "Suicide Chump," as if to fit as much as he can into these shows. This new set contains over eighty different songs, many have which appear here for the very first time of their release. Frank and his band seem to be on their best behavior during these two Halloween shows, showing off their jazz, rock and somewhat classical sides, as well as performing favorites like "Dancin' Fool" and "Joe's Garage." The only times that the band really get to jam is during some of the epic numbers like "Yo Mama," "Torture Never Stops" and "King Kong," which really allows you to see how great this band gels together onstage.

The November 1st show is where you really get to hear the band letting loose, right from the bluesy opening of "Zoots Allure," through and electrified version of "I'm The Slime," into the high-powered rock attack of "Pound For A Brown." While not many of the songs were repeated from each other shows, one song in-particular does make multiple appearance during this run of shows. Their cover of The Allman Brothers Band's classic blues piece "Whipping Post," which is performed with as much energy as any of Zappa's original music. The young "Little Italian Virtuoso" Steve Vai is the unsung hero of these shows by giving many of Zappa's classics a sonic haircut, in order to give them a new sound.

As the final notes of another epic delivery of "The Torture Never Stops," ring through the speakers, Frank Zappa give a final salute "see you next year," although he would not perform another Halloween show until 1984, which would also be the last time he would play on Halloween. The sound on these shows is truly stunning, which have been remixed from the original analog tapes by Craig Parker Adams with the supervision of Ahmet Zappa and Zappa Vaultmaster Joe Travers. The box set also includes a Frank Zappa vampire mask and costume, along with a 40-page booklet with rare photos from the event, as well as new liner notes from Travers, along with band member Robert Martin and "super fan" Gary Titone. To find out more about this new Frank Zappa "Halloween 81" box set, please visit zappa.com.