The Neptunas Bring You To The "Mermaid A-Go-Go" 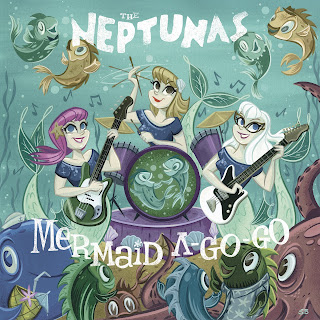 Arriving September 24th is the new full-length release from the all-female, surf-guitar trio, The Neptunas. It's the first set of new material from the band in over fifteen years and the new album was produced by Los Straitjackets' Danny Amis. It features twelve tracks (half are instrumentals), along with three bonus tracks.

The Neptunas start off their new album with the instrumental "Billy The Squid's Water Pistol," which is actually the perfect opener, with a steady pace and some Mexican horns give the song some more depth. Next comes the high-energy, alternative-pop tones of "Secret Of The Sea" and the spot on cover of The Kinks' "Til The End Of The Day." The delivery of "Shark Tooth Necklace" gets the energy flowing with shouts of the song's titled to keep the intensity going, while the title track, "Mermaid A Go-Go," will easily turn you in to a fan, as the song mixes in a sixties rock vibe to this underwater pop gem. The Neptunas give us the perfect remedy for the end of summer by going back to school with a new anthem for kids with "School Is A Drag."

They finish their new album with a cover of the surf instrumental "The Lonely Bull," which was made famous by The Ventures, along with three bonus tracks. The fun, swinging rhythm of "Neptuna Car Wash," the storied tale of "Hey Jimmy Freak" and "Sorority Stomp," their ode to the '90 frat rock band, The Mighty Kegsmen. Look for a vinyl edition of this latest release from The Neptunas to arrive early in 2021. To find out more about "Mermaid A-Go-Go," the new album from The Neptunas, please visit facebook.com/theneptunas and check out alteredstateofreverb.com to order this new release.

CD available at www.alteredstateofreverb.com
Vinyl in 2021