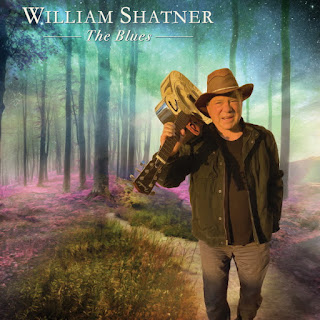 What do you get when you cross one of America's oldest music genres with the original commander of the USS Enterprise? Answer is a new blues album from William Shatner. His new musical adventure simply titled "The Blues," will be released on October 2nd through Cleopatra Records and find Shatner teaming up with some of the biggest names in rock and country music to interpret these blues classics as only Shatner knows how.

He begins by blowing the doors down with a rocking version of "Sweet Home Chicago," which features Brad Paisley on guitar, as William Shatner lays it all on the line on this opening track. American blues guitarist Kirk Flecher supports Shatner's raw vocals on the Willie Dixon staple "I Can't Quit You Baby" and legendary guitarist Richie Blackmore lays down some beautiful licks on the spoken word vocal delivery of Shatner on B.B. King's "The Thrill Is Gone." The team of Pat Travers and William Shatner combine for the perfect sound to rival "Screamin' Jay" Hawkins' original version of "I Put A Spell On You," while a great, stripped down version of "Crossroads" is the right touch for Shatner to feel right at home, along with some stellar guitar work from James Burton. William Shatner finishes up his new blues album with the political statement of "Let's Work Together," featuring the music of Canned Heat, along with Shatner's own dark interpretation of "Secrets And Sins." To find out more about William Shatner's new release "The Blues," please visit cleorecs.com.