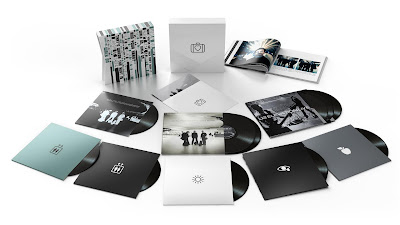 Arriving October 30th is a new deluxe box celebrating the 20th anniversary of U2's tenth studio album, "All That You Can't Leave Behind." The album won seven Grammy Awards, topped the album charts around the world and has sold over 4 million copies in the U.S. alone. The first four songs ("Beautiful Day," "Stuck In A Moment You Can't Get Out Of, "Elevation" and "Walk On") on the album were also very successful singles that helped propel the album to superstardom. This album was also a "return to form" for many critics, after the misstep of their 1997 album "Pop." To celebrate the 20th anniversary of the album, Island Records, Interscope and UMe are releasing a 51-track super deluxe box set, which includes a brand new remastered version of the original album. The super deluxe box set will be released physically on CD and vinyl, along with a digital version of the set available separately.

The new remastered version of the album sounds amazing. Songs like "Beautiful Day" and "Elevation" are given an extra punch of energy, while the elegant sixties-style pop of "Wild Honey" and the bluesy touch of "In A Little While" are given a high-class makeover. The beautiful guitar work from The Edge on "When I Look At The World" simply jumps out of your speakers and Bono's honest, poetic vocals on "Grace" allows you get hypnotized by his voice. The original 11-song album is extended by the bonus track "The Ground Beneath Her Feet," which was originally a European bonus track. 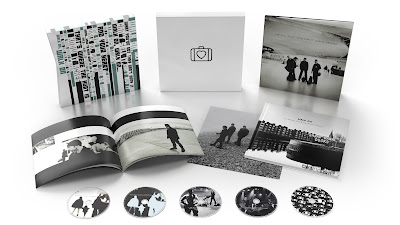 The set also includes the B-sides, outtakes and alternate versions that were featured on the single releases. Many of these tracks do not feel up to the standard of the songs that were on the original album, with the exception of the "unplugged" strumming of "Summer Rain" and the deep bass groove of "Big Girls Are Best." I'm confused about about U2's rendition of Johnny Cash's "Don't Take Your Guns To Town." They add a reggae vibe to a song about murder, it seems to give off mix signals . I do love the stripped down version of "Stuck In A Moment You Can't Get Out Of" and wish that more tracks from the album were presented in this format, as an acoustic set of hits from this album.

U2 included their live show from Boston from their 2001 "Elevation Tour," which was first released as a stand-along DVD in November 2001. The set includes the full nineteen-song set from the video and sounds great, one of the best sounding live U2 shows to be released on DVD and vinyl. I hope this becomes more of a trend and U2 release more audio from the their live shows. Eleven remixes from the U2 vault closes out the set. Four of these remixes have never previously been heard or released. While I'm not a huge fan of remixes, I did enjoy the "Influx Mix" of "Elevation," which gives the song a Middle Eastern flair. Also, the "Superman Kicks Ativan Mix" of "New York" is pure EMD and resembles very little of the original song. I also enjoyed the "Nightmare On Wax Remix" of one of the lesser known tracks, "In A Little While."

A 32-page, hardcover book is also included in the set which features many previously unseen photos of the band shot by longtime friend of the band Anton Corbijn, during photo shoots for the album. This new 20th anniversary release is also available as a double-vinyl set, which features the album cut across all four sides. There is also a two-disc CD set which included the newly remastered album and a disc of highlights from the "Live In Boston" set. To find out more about this 20th anniversary of U2's "All That You Can't Leave Behind," please visit u2.com.