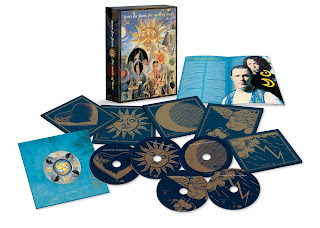 On October 9th UMe/Virgin will unveil a new, deluxe edition of Tears For Fears' 1989 album "The Seeds Of Love." This album originally followed the band's break-out album "Songs From The Big Chair" and hit #1 on the U.K. Album chart and #8 on the U.S. Album chart. It has since gone on to sell over a million copies in the U.S. alone and features the top ten single "Sowing The Seeds Of Love." This new deluxe box set of the album includes four CDs and a Blu-ray, filled with demos, studio jams, B-sides and single edits of the songs from "The Seeds Of Love" album. A remastered vinyl and picture disc are also arriving, along with an inexpensive 2CD special edition release.

The original album has been remastered by Andrew Walter at Abbey Road Studios specifically for this new release, and believe me it sounds amazing. Tears For Fears seemed ahead of their time on this album. The music is more timeless and has a universal appeal with songs like the soulful, jazzy 8-minute jam of "Badman's Song" and the worldly vibe of "Swords And Knives." There is of course the pop anthem "Sowing The Seeds Of Love," along with the R&B duet "Woman In Chains" (featuring Oleta Adams on vocals and Phil Collins on drums) and the closing ballad "Famous Last Words." Even the B-sides that did not make the final album like "Tears Roll Down" and "Always In The Past" are exciting, energetic and spiritual, and appear on the second disc of this set. Along with these B-Sides are instrumental versions of "Woman In Chains" and the beats infused "Johnny Panic And The Bible Of Dreams," which also appears in two other remixes. 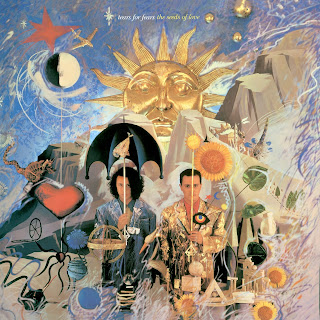 The third disc of this set features more radio edits and remixes, along with an alternative version and an instrumental version of the timeless single "Sowing The Seeds Of Love," which all sound similarly to original released version we all know. Their is a beautiful keyboard-only version of "Woman In Love: Reprise" that closes out the third disc, but fans may want to dive directly into the fourth disc, filled with demos and studio jams. The quality of these demos are quite good, for never being planned for release. The final six songs in the set make up the "Townhouse Jam," which are simply stunning. These versions of "Rhythm Of Love" and "Standing On The Corner Of The Third World" may even rival the originals, as far as being superior versions.

The Blu-ray included with the Super Deluxe Edition of the new "The Seeds Of Love" reissue includes multiple versions of the album, including the original version, the new remastered version and a 5.1 mix of the album by Grammy-nominated artist Steven Wilson. The set also includes a 36-page, full-color booklet with new essays and interviews and some of the classic artwork from the original album. To find out more about this new reissue of Tears For Fears' "The Seeds Of Love" album, please visit tearsforfears.com.