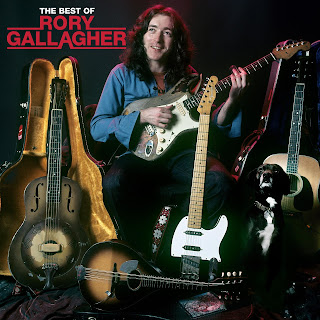 Arriving Friday, October 9th is a new compilation from the late, great blues/rock singer, songwriter, guitarist Rory Gallagher simply titled "The Best Of Rory Gallagher." Rory started out in the mid-sixties with his band Taste, before going solo in 1970. His would perform, record and produce albums for another twenty-five years, until his untimely death in 1995. This new thirty-track release will certainly remind you of how good of a performer Rory was, not only on guitar (which is amazing in songs like "Shadow Play" and "All Around Man"), but also as a singer and songwriter for the blues.

Songs like "Edged In Blue" and "Crest Of A Wave" showcase Rory's passion for the guitar with his exceptional playing. When talking about some of the greatest guitarists in rock history, Rory should be mentioned right next to the best of them, like Eric Clapton, Jimmy Page and Jeff Beck. The set does include four songs from his band Taste sprinkled throughout the compilation, plus one previously unreleased alternate take of a duet with the immortal Jerry Lee Lewis performing The Rolling Stones' classic "(I Can't Get No) Satisfaction."

The compilation covers all aspects of Rory's songwriting, from the hard rock of "Moonchild" and "Cruise On Out," to the jazz vibe of "They Don't Make Them Like You Anymore," to of course the deep southern blues of "Out Of My Mind" and "Seven Days." This new "Best Of Rory Gallagher" comes full circle, opening with Taste's biggest hit "What's Going On," and then closing out this new set with Gallagher's eight-minute reinterpretation of the blues standard "Catfish." This new set will be available as a full 30-track 2-CD set, a condensed 15-track single CD or as a clear limited edition double vinyl set. To find out more about "The Best Of Rory Gallagher" arriving October 9th, please visit facebook.com/RoryGallagher.