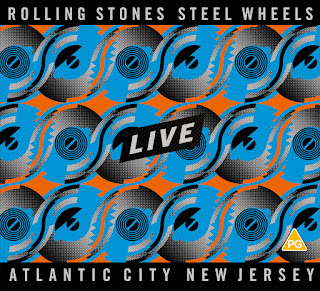 Most of the mid-1980s was not kind to The Rolling Stones. A couple of semi-decent albums that pretty much went nowhere on the charts and no tours lead to the band going their separate ways. Then, in 1989 Mick Jagger and Keith Richards put their differences aside and created an album {"Steel Wheels") that would go on to sell over two million copies in the U.S. and hit the top spot in other countries around the world. Even more impressive than the album was the tour that followed. It was the first Rolling Stones tour in over seven years and featured Guns N Roses and Living Colour as opening acts. This tour would also be the last time that long-time bassist Bill Wyman would perform with the band for almost two decades.

A new release titled "Rolling Stones Steel Wheels Live" reminds us that in the 1980s, bigger was better and The Rolling Stones had one of the biggest stages in the history of rock and roll. This new release arrived on September 25th in a number of different formats including a 2CD/DVD or Blu-Ray set and also on black and colored vinyl. The music and video was fully restored, remixed and remastered and released by Eagle Vision Entertainment.

The first thing you will notice watching the video is how great the quality of this recording is after sitting in the vault for more than thirty years. Mick Jagger seems to be in the best shape of his life, because he runs around the stage for 2 1/2 hours, and this stage is huge. When the camera pans out is the only time you can fully appreciate the gigantic size of it. Looking back, this show feels like the perfect greatest hits set with songs covering their entire career, from "Ruby Tuesday" to "Tumbling Dice" to the crowd pleaser "You Can't Always Get What You Want."

This show also featured a few special guests, including Axl Rose and Izzy Stradlin from Guns N Roses performing on the deep cut "Salt Of The Earth," as Axl seems to steal the spotlight away from Mick. After the extended jam of "Midnight Rambler," a third guitarist appears with Keith Richards and Ron Wood, which is non-other than Eric Clapton. He lends some blues licks to The Rolling Stones' cover of "Little Red Rooster." Then the legend, John Lee Hooker takes centerstage for a burning version of his classic "Boogie Chillin."

The whole night, the camera are only focused on the band, but given the size of the stage, the audience had to be just as large. The entire night was filled with one hit after another as they run through "Brown Sugar," "(I Can't Get No) Satisfaction" and "Jumpin' Jack Flash" to close out the show. Listening to just the recording without the video, you would think that the band were performing close together on a small stage, as everyone has super-human energy at the end of the show. To find out more about this great new live release from The Rolling Stones "Steel Wheels Live Atlantic City New Jersey," please visit rollingstones.com/steel-wheels-live.