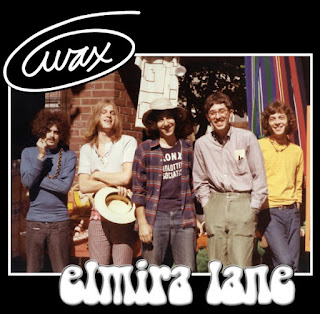 Legendary songwriters, producers and front men that helped shape the music scene in the seventies and eighties came together in 1969 to form the band, WAX. Rob Hyman (The Hooters), Rick Chertoff (Cyndi Lauper), Rick Levy (The Box Tops), David Kagan (Baby Grand) and Beau Jones were one of top acts in the Philadelphia, packing clubs in New England. WAX entered the studio in 1970 to record songs for Vanguard Records, but they would not see the light of day until their release, nearly four decades later. The one and only WAX album "Melted" was released in 2010 and seemed to be the final word on the band, that was until a new box of master recordings was discovered and was released back in September as "Elmira Lane," to celebrate WAX's 50th anniversary.

The new fourteen track release showcase a youthful band ready to conquer the airwaves and fill arenas with rocking songs like "Elmira Lane" and "On And On." Although the recordings have been cleaned-up for this new release, they still have some rough edges on the newly discovered Regent Sound versions that still show some of the age of these songs. WAX also shows us a more elegant side with the beautiful harmonies of "Nearer To God" and "Warehouse Eyes," as the band had the perfect recipe for success. The highlight of the set has to be the ten-minute, epic, soulful jam "Greasy Suite," which fully displays the young talent of these five individuals. This new set closes with the funky beats of "It Don't Matter At All," as the legend of WAX lives on through these newly discovered recordings. To find out more about the music of WAX, please visit meltedwaxmusic.com. 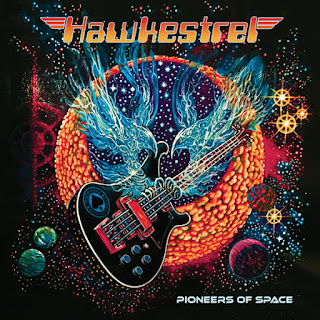 Hawkwind alumni Alan Davey is preparing to release a new album from the prog-rock supergroup, Hawkestrel. The new album titled "Pioneers Of Space," features nine new tracks that includes contributions from Todd Rundgren, Mick Taylor and David Cross, just to name a few of artists that helped shape the music on this latest adventure. The eight-minute opener "Biometrics" is a straight-up, hard rock number that, then takes you off into space, with its swirling middle instrumental break, before finishing the song with a more intense sound. Alan Davey and Hawkestrel can't help but bring up the classic sound of Hawkwind with the intensity of "Day Of The Quake." Todd Rundgren steps in with some great guitar work on the band's high-energy instrumental cover of Post Malone's song "Circles." Hawkestrel finishes up their latest album with the prog-rock wizardry of "Journey" and the steady rising, atmospheric rock groove of the title song, "Pioneers Of Space." To find out more about Hawkestrel and their latest release "Pioneers Of Space," please visit cleorecs.com.
Posted by JP's Music Blog