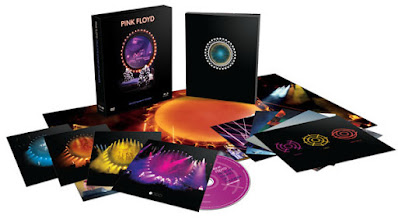 In 1986, the legendary Pink Floyd would enter the studio without two of its founding members (Roger Waters and Richard Wright) to record their first set of new music since the underappreciated album, "The Final Cut" in 1983. This began a new era for the band, lead by guitarist/singer David Gilmour and the only remaining original band member, drummer Nick Mason. The album "A Momentary Lapse Of Reason" was released in 1987 to mostly positive reviews and was hailed as a "return to form" for the band. But, bigger than the release of a new studio album from Pink Floyd was the world tour that followed. A five night performance at the Nassau Coliseum in Long Island, NY was the basis for a new live album and home video titled "Delicate Sound Of Thunder." This was Pink Floyd's first ever official live release and featured only a portion of the band's live show, as the original CD, cassette and vinyl release featured different line-up of the live show. The album reached #11 on the Billboard Album charts and has gone on to sell triple-platinum status (over 1,500,000 copies) in the U.S. alone.

A new remix of the "Delicate Sound Of Thunder" album was released with the new Pink Floyd "The Later Years 1987-2019" box set, last year (review: www.jpsmusicblog.com). The sound of the live recording was cleaned-up and remixed by Pink Floyd's long-time engineer Andy Jackson, along with support from David Gilmour and Damon Iddins. On November 20th, Legacy Recordings will unveil a stand-alone version of this new remix on CD, Blu-ray, DVD and on vinyl. The new two CD set will include eight songs that were omitted from the original release, while nine songs will be included on this new triple-vinyl set, which also includes a 24-page, full-color photo booklet. 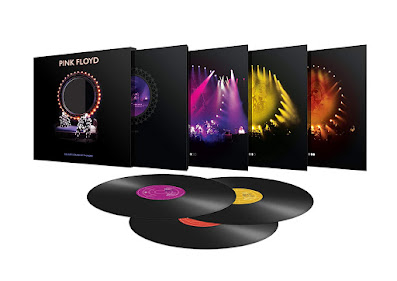 The separation of the instruments on this new vinyl release is simply amazing. This new remix allows for the music to breathe on its own, as the opening notes of "Shine On You Crazy Diamond" warm up your speakers for over two hours of stunning music. The vinyl is dead quiet and allows what little crowd noise is included to be heard uninterrupted. Songs like "Sorrow," "The Dogs Of War" and "One Of These Days" will remind you of how great and powerful this band was live, even during their later years together. My favorite version of "On The Turning Away" also appears as beautiful as ever with Gilmour's vocals starting the song off with a delicate touch, while the rest of the band follow his lead, which erupts into an amazing guitar solo. This new restored version also includes classic tracks like "The Great Gig In The Sky," "Welcome To The Machine" and "Us And Them" into their rightful place alongside other songs from "Dark Side Of The Moon" and "Wish You Were Here."

After making it through all two-and-a-half hours of music, you feel as if you were part of something bigger, something historic, which during these times, may feel very emotional, as concerts were something to behold and not take for granted. So, as you watch the film or listen to the show, you will no doubt believe that Pink Floyd was and is one of the best live bands of all time. To find out more about this new restored, re-edited, remixed version of Pink Floyd's "Delicate Sound Of Thunder," please visit delicatesoundofthunder.pinkfloyd.com.