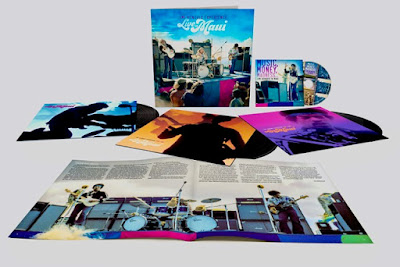 Back in 1971, a small film about the unique counterculture of the late-sixties on the island of Maui was released. The film was directed by Chuck Wein, (who was an associate to Andy Warhol and discovered the fashion model Edie Sedwick) and was produced by Michael Jeffrey, who was managing Jimi Hendrix at the time. Hendrix needed money to build his famous Electric Ladyland studios and Jeffrey needed music for a soundtrack to his film "Rainbow Bridge." Hendrix was brought out to Maui, along with Mitch Mitchell and Billy Cox to perform a concert at the side of a volcano, which was to become the pinnacle piece to the movie. The Jimi Hendrix Experience performed two sets, over 100 minutes of music, but due to technical difficulties only 17 minutes of footage was included in the film. Hendrix was also supposed to create a unique soundtrack to the movie, but unfortunately passed away less than two months after this show was performed and no new music was ever made.

When the film was released, it received negative reviews and was a commercial disaster. The soundtrack included mostly studio work that Jimi Hendrix was working on for his next album, but none of the music from the concert was used. To celebrate the 50th anniversary of that landmark show, Experience Hendrix in partnership with Legacy Recordings (a division of Sony Entertainment) is releasing a new 2CD/Blu-ray and triple-vinyl/Blu-ray release titled "Live In Maui." It includes both sets from the Jimi Hendrix Experience's show on July 30, 1970. Bootlegs of this show (being one of Jimi Hendrix's last live performances) have been circulating for years, but believe me, this is the best it ever sounded. Jimi Hendrix's longtime engineer, Eddie Kramer newly mixed the music from the show, which was mastered by the great Bernie Grundman.

The show was plagued by recording malfunctions and wind whipping through the microphones, which actually caused drummer Mitch Mitchell to re-record many of his drum parts in the studio, in order to enhance the performance. This new set will leave you stunned that that music that was recorded outside during 20 mph winds can sound that good. Kramer and Grundman did a masterful job cleaning and remixing these two performances that Billy Cox said was one of the best performances by this trio. Hendrix was on fire and as you can see in some of the film footage of the show, he tried to portray that energy onto the audience. Both the first show and the second show were recorded fully, but only the first half of each performance was filmed and as mentioned before only 17 minutes of that footage was used in the film.

Speaking of film, the accompanying Blu-ray features a full-length, 90-minute documentary titled "Music, Money, Madness... Jimi Hendrix In Maui." This film catches up with nearly everyone that was involved with the distasterous film "Rainbow Bridge." From the film's director, to the people from Maui that were in the film, to Eddie Kramer, photographer Brian Byrnes and even Jimi Hendrix's close friend Colette Harron, along with his bandmates Billy Cox and Mitch Mitchell. The documentary tries to find the silver-lining into what what could have gone right and what did go right for the film. Obviously, the music and the concert is the shinning star of this new release. The documentary also includes unseen footage that was shot for the film, but was never used, as well as live footage of the band's performance at the Honolulu Arena the following night. Considering the age of the footage and the complications that the film crew endured, I was very impressed with quality of the concert film and how clean the recording sounds. To find out more about the new Jimi Hendrix Experience release "Live In Maui," please visit jimihendrix.com.