Elton John Opens The Vault For His New "Jewel Box" 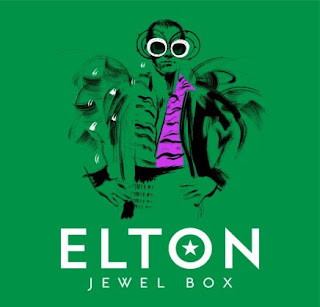 Let's get one thing straight, there is and only ever will be one Elton John and anything new that comes from this musical legend is cause for celebration. Elton John's latest release does not include any new music and is titled "Elton: Jewel Box." It features 148 songs (60 previously unreleased) spread across 8 CDs and over half of those songs are making their digital debut on November 13th. Now, these songs are broken down into three categories. The first set is titled "Deep Cuts Curated By Elton," which includes released songs from throughout Elton John's career that have meant something personal to the artist and may not have seen the singles charts. The second set is called "Rarities and B-side Highlights," this is where hardcore fans will want to start because of the all the demos and studio outtakes that have never officially seen the light of day, until now. The third set is named "And This Is Me..." and it is sort of a soundtrack to Elton autobiography simply titled "Me." All the song in this third set have been mentioned by their titled in his book. Now, all of these sets appear together on CD in the "Elton: Jewel Box" set, but are broken off into three individual releases on vinyl.

The first set "Deep Cuts Curated By Elton" appears on the first two CDs of the box set or as a separate four-LP box set. All of the songs sound stunning, especially on vinyl throughout this set. The music was mastered by Grammy-winning engineer Sean Magee at Abby Roads Studios and it jumps right out of your speakers. Fans will be familiar with many of the tracks in this first set, but may have forgotten how great these "lesser" know deep tracks are. Many of these great songs range from the early rock days of "Where To Now St. Peter?" and the blues of "Mellow" to the eighties pop of "Too Low For Zero" and the scarce solo piano piece "The Bridge." Hearing songs like "Stone's Throw From Hurtin'" and "Crystal" may remind you that Elton's career during the eighties was about more than just pumping out hit singles, unlike his full album masterpieces of the seventies. Three songs from this set also feature the late, great Leon Russell, which Elton recorded the great album "The Union" with back in 2010. Do yourself and rediscover this this classic with the tracks "Monkey Suit," "Gone To Shiloh" (which also includes Neil Young on vocals), along with "Never Too Old (To Hold Somebody)."

As I said before, fans will want to dive right into the set titled "Rarities and B-side Highlights" which includes a treasure trove of delights. The first part centers around Elton John earliest recordings including his first song "Come Back Baby" from 1965 and Elton's first collaboration with Bernie Taupin in the form of "Scarecrow" from 1967. Many of these early demos are still rough recordings, but have been cleaned up as much as possible to provide the best sound of these vault gems. Many of the songs included in the second part (1968) of this rarities set was for Elton John's planned debut album "Regimental Sgt. Zippo," but sadly were overlooked like the high energy progressive rock approach of "New Oxford Street" and the psychedelic pop of "Sitting Doing Nothing." This set also includes early versions of some well-known classics like "Burn Down The Mission," "Madman Across The Water" and "Holiday Inn."

The "B-sides Highlights" stretches across two CDs, but only includes five of the twenty-six tracks on only one side of the vinyl set. Many of these B-sides will have their digital debuts and sound better than every before, thanks to the amazing remastering by Sean Magee. The final section of this new set "And This Is Me..." tells Elton John's story through sixteen songs, beginning with Elton's first song on his debut album "Empty Sky" and finishes with his Grammy-award winning collaboration with Taron Egerton on "(I'm Gonna) Love Me Again." To find out more about this great new set of musical gems from Elton John in "Elton: Jewel Box," please visit eltonjohn.com.