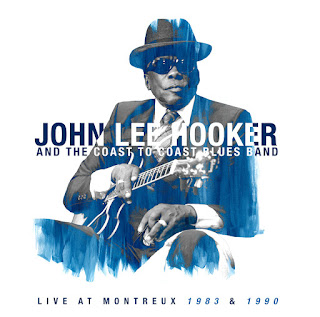 Arriving November 6th from Eagle Rock Entertainment is a new live John Lee Hooker double vinyl and digital video release titled "Live At Montreux 1983 & 1990." These two recordings showcase the resurgence in John Lee Hooker's popularity, as he steals the spotlight at both festivals with his concisely perfected nine-song sets that features the boogie blues of Hooker's guitar playing, along with his stellar backing band, the Coast To Coast Blues Band. As soon as John Lee Hooker walks out onto the stage with a drink in his hand in 1983 and sat down, he commanded all eyes on him. The video zooms right in on his fingers simply strumming those guitar strings, laying down the rhythm of the song, while his stoic face lays out the blues.

John Lee Hooker's appearance in 1983 finds him performing most of his well-known tracks like "Boom Boom" and "Crawlin' King Snake." The live setting quickens the pace of "Hi-Heeled Sneakers" and coincidentally turns "Worried Life Blues" into a slow burning numbers that ends too quickly. The energy onstage explodes during the encore jam session of "Boogie Chillin'," which gets Hooker and the audience up on their feet. The energy of this closing number shows the affect that John Lee Hooker's music can have in a live setting.

When John Lee Hooker returns to Montreux in 1990, he is celebrating his recently Grammy Award winning album "The Healer." He also adds some horns to his Coast To Coast Blues Band, to give his music another dimension. John Lee Hooker comes out on to the stage as the coolest cat you'll ever see and slows everything down for the slow, steady pace of "Mabel." He wastes no time diving into tracks from his new album like "In the Mood" and "Baby Lee." Even though some of the tracks repeat from both shows, they are presented differently, like "Crawlin' King Snake" includes backing female vocals by Vala Cupp. The 1990 shows features a slow set of blues numbers, before Hooker and his band reach his iconic song "Boom Boom," which blows the roof off the place. The video is what you'd expect for a recording from the eighties and nineties, with the main focus on the centerstage star, John Lee Hooker. To find out more about this new release from John Lee Hooker "Live At Montreux 1983 & 1990," please visit johnleehooker.com. 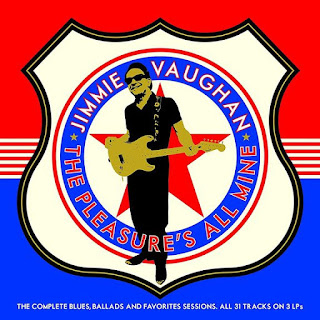 Another bluesman with a new release is the great Jimmie Vaughan with "The Pleasure's All Mine." It combines two of Jimmie Vaughan's most respected albums "Blues, Ballads And Favorites" and "More Blues, Ballads And Favorites" as a double CD set and for the first time as a triple vinyl release. The 31-track album kicks off with the title-track, a cover of Billy Emerson's "The Pleasure Is All Mine" and the steady blues romp of "Come Love." This release reminds us of how great a guitarist Jimmie Vaughan is with stellar instrumentals like "Comin' & Goin'" and "Greenbacks." Vaughan also demonstrates his classic boogie-swagger with songs like "Just A Little Bit" and "I Ain't Gonna Do It No More," while also taking well-known classics like Willie Nelson's "Funny How Time Slips Away" and Jimmy Reed's "I'm A Love You" and making them all his own. This new release also includes the bonus track "Bad Bad Whiskey" that was featured on the CD reissue. This new release not only celebrates the tenth anniversary of the original album's release, but also leads up to Vaughan's 70th birthday in March 2021. To find out more about the newly released "The Pleasure Is All Mine" from the great bluesman Jimmie Vaughan, please visit jimmievaughan.com.
Posted by JP's Music Blog