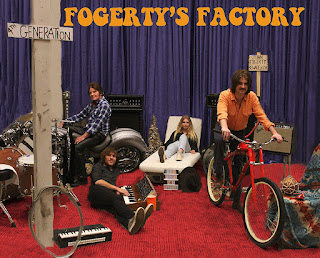 Rock & Roll Hall of Famer John Fogerty took advantage of his time self-quarantining from the COVID-19 virus by creating a new studio album with his family. The new release titled "Fogerty's Factory" features John, along with his sons Shane and Tyler, along with his daughter Kelsey performing some of dad's classics like "Centerfield," "Proud Mary" and "Bad Moon Rising." What began as a way to pass the time by creating YouTube videos (youtube.com/channel), became a new full-length studio album that was released on November 20th through BMG Records. A vinyl version of the album will be released in January 2021.

The new twelve song album begins with a live version of "Centerfield," performed at an empty Dodger Stadium (home of the World Series Champions), by John Fogerty and his family for his 75th birthday on May 28th. This iconic track is followed by a great acoustic version of the Creedence Clearwater Review (CCR) classic "Have You Ever Seen The Rain," performed for The Colbert Show. John's vocals sound as strong and timeless as they ever have. Then John gets his family involved, beginning with with politically charged "Lean On Me," which is perfectly appropriate now as when it was originally released back in 1972 by the late, great Bill Withers. Then Fogerty and his family breathe new life into the CCR deep tracks with the upbeat "Hot Rod Heart" and "Tombstone Shadow," before slowing down for the sweet, gentle strumming of "City Of New Orleans." The album closes with a pair of CCR hits ("Bad Moon Rising" and "Fortunate Son") performed for a live broadcast ("The Fogerty Rockin' Family Hour") on SiriusXM radio, along with "Don't You Wish It Was True," a song about positivity and coming together to conquer the evils in the world. To find out more about John Fogerty and his new family album "Fogerty's Factory," please visit facebook.com/johnfogerty.