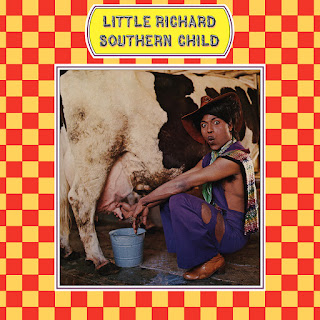 Since the passing of American music icon, Little Richard, Omnivore Recordings has done an exceptional job reissuing his Reprise Records releases throughout the seventies and eighties. One such record, recorded back in 1972, was never released, until 2005. The album "Southern Child" was completed, then shelved, in favor of Little Richard's album "The Second Coming." The tracks that were recorded for this album were eventually released as part of the "Complete Reprise Recordings" box set back in 2005. Now, for the first time, Little Richard's 1972 album "Southern Child" will be released on yellow colored vinyl on November 27th and on CD on December 4th. The CD also arrives with bonus tracks from the recording session for the song "In The Name."

The album was a turn in style than what fans of Little Richard may have been used to at the time. He stepped out of his rock and roll shoes and put on his cowboy boots for this release, which seemed like a much welcomed change that Little Richard was more passionate about releasing. Songs like the country blues of "Burning Up With Love" and the gospel praise of "Southern Child" finds Little Richard revisiting his roots. The twang of "In The Name" sounds as if it came from the Buck Owens catalog, but finds Little Richard expanding his repertoire, as you hear him attempting different takes of this song with some of the bonus tracks. The album closes with the eight-minute funk jam "Puppy Dog Song," which definitely sounds more in tune to what Little Richard was used to creating back in the early seventies. One of the bonus tracks is the fun, classic sounding rockabilly swing of "Sneak The Freak." To find out more about this new reissue of Little Richard's "Southern Child" album, please visit omnivorerecordings.com. 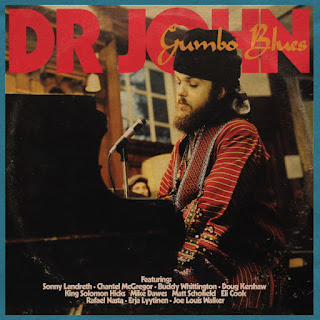 Another new release from a legendary icon who recently left us is a new album from Dr. John titled "Gumbo Blues." Back in 1973, Dr. John took over the singles charts with his hits "Right Place, Wrong Time" and "Such A Night." He looked to continue to build upon that success with the albums "Desitively Bonnaroo" and  "Anytime, Anywhere." The later became a an inspiration for fellow New Orleans' blues artists to aspire to. Now, they pay homage to Dr. John with the newly released compilation titled "Gumbo Blues," which takes his vocals from 1974 and adds a new blend of blues music.

The album kicks off with the swinging blues of "In The Night," which features the guitar boogie of Joe Louis Walker mixed with the iconic vocals of Dr. John to make a perfect recipe for fun. Fellow guitar player Mike Dawes adds his signature fingerstyle of playing to "Shoo Ra" and Rafa Nasta gets funky on "Woman Is The Root Of All Evil," which adds a youthful energy to the song. American blues guitarist/singer Eli Cook lends his talents to the classic blues sound of "Cat And Mouse Game," before the album finishes with the energetic romp of "She's Just A Square" highlighted by King Solomon Hicks' performance, along with the bluesy ballad "Danger Zone," featuring Finnish guitarist/singer Erja Lyytinen. To find out more about the new Dr. John release "Gumbo Blues," please visit cleorecs.com.