Up The Irons With The New "Nights Of The Dead, Legacy Of The Beast" Release From Iron Maiden 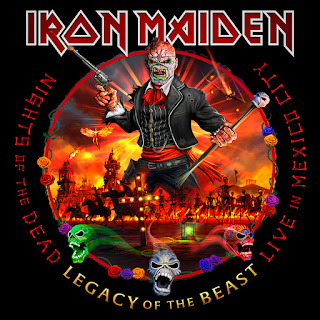 On November 20th, Iron Maiden will release their latest live extravaganza "Nights Of The Dead, Legacy Of The Beast: Live In Mexico City." It was recorded in September 2019 during the band's three sold out shows at the Palacio de los Deportes and highlights the band's current world tour which is now planned to conclude in July 2021. This three year tour followed the band from Europe to the U.S. then to Canada, then South America and eventually back to Europe. The new live release will arrive in a handful of different options including a limited edition deluxe 2CD book format release, along with an exclusive Mexican flag triple colored vinyl set.

The "Legacy Of The Beast" show was a bombardment of some of the band's most well-known hits like "Aces High," "The Trooper" and "Revelations." The difference from the band's normal "greatest hits" show is that this one is supposed to tell a story of a military person, who find redemption before being dying and facing the beast in hell. Right from the opening guitar riffs of "Aces High," they are right up front in the mix, along with singer Bruce Dickenson's vocals. The drums and bass are set back, but sound like they get a more prominent place in the song "The Clansman." The audience almost seems non-existent (at least compared to what you'd expect from Mexico City), unless Bruce calls on them to respond. Iron Maiden also dive into their more progressive metal side with the epic musical pieces "For The Greater Good Of God" and "Sign Of The Cross," which have not been performed in many year prior to this tour.

A number of classics, which fans have heard many times before on live releases, close out this new release, but still showcases the band in top form. The energy just explodes as they perform the classics "Number Of The Beast" and "Iron Maiden." The visuals that accompanied this entire show was also stunning and I hope that a Blu-ray/DVD is in the plans for a future release of a show from this tour, because attending one of the shows on this tour was a treat to the creativity that Iron Maiden continues to delivery with every show. The addition of "Hallowed Be Thy Name" back into their shows displays the love that fans have for this song, along with the iconic Iron Maiden closer "Run To The Hills." After more than twenty years together, this current and most stable line-up of Iron Maiden can still out perform any band out there and sound as great as ever. Long live Iron Maiden! To find out more about their new live album "Nights Of The Dead, Legacy Of The Beast: Live In Mexico City," please visit ironmaiden.com.