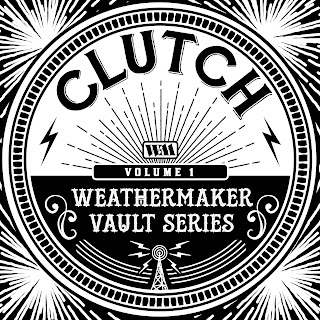 What started last summer as special digital only single release from the rock band, Clutch has now become the band's 13th studio album titled "The Weathermaker Vault Series, Vol. 1." The record label, Weathermaker Music, is owned by Clutch and their manager, Jack Flanagan and beginning in mid-2019, Clutch would release a newly recorded single every six weeks for fans to enjoy and keep the band motivated to record. Clutch has collect nine of those digital only released recordings and created this new album, which also includes the unreleased track "Algo Ha Cambiado," which is an old punk track from Argentinian legend, Norberto Napolitano. The album is a mixture of re-recorded version of their earlier songs and covers that the band fully enjoyed performing.

The album kicks off with the aggressive, punk-like energy of "Passive Restraints," which originally appeared on Clutch's 1992 EP of the same name. Clutch also add a bit blues to their hard rock sound with their updated version of "Electric Worry," which has the boogie-woogie guitar feel of John Lee Hooker's "Boom Boom" and borrows partial lyrical formation from blues legend Muddy Waters. Clutch then adds an extra punch of energy to Howlin' Wolf's "Evil (Is Going On)" and delivers a proud political message with their version of Creedence Clearwater Revival's "Fortunate Son." They dive way back into their catalog to jam out on the seven-plus minute pounding hard rock assault of "Spacegrass," before they finish their new album with the high-powered delivery of "Smoke Banshee" and raw, country-rock assault of "Willie Nelson." To find out more about Clutch and their latest release "The Weathermaker Vault Series, Vol. 1," please visit pro-rock.com.