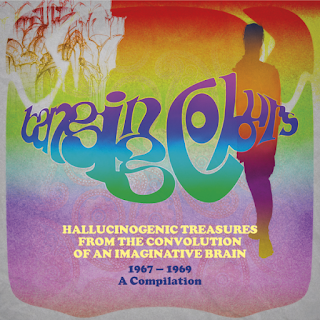 During the swinging sixties of London's underground music scene, there was a band that fully encapsulated the psychedelic era and that band was named, Banging Colours. During the band's short existence (1967-1969), they performed along such greats as the Jimi Hendrix Experience, the Pink Floyd and Soft Machine, while also creating a soundtrack to that era, which was not heard by many outside of the U.K. On December 4th, the world finally heard the music Banging Colours with a new compilation titled "Hallucinogenic Treasures From A Convolution Of An Imaginative Brain." It features twenty tracks that are made up of studio recordings and rare radio appearances.

The first three tracks ("The Love And Fun Brigade," "Evaporation Of Linearity" and "If God's A Fly") are a full 25-minutes of psychedelic rock that will give you instant flashbacks to the late-sixties music scene. Banging Colours through all the talents into a pot in order to create a unique musical blend that has never been repeated in the last five decades. The band's British blues sound makes it presence known in tracks like "Tapestry Puzzle" and "Toward The Great Oneness," while "Waves" sounds like a lost gems from the early days of Pink Floyd. The second half of this release consists of a five part musical suite titled "Gustav Metzger Improv" and a trio of radio session improvisations that displays the raw, exciting music that Banging Colours was able to create at any given moment. To find out more about their new compilation "Hallucinogenic Treasures From A Convolution Of An Imaginative Brain," please visit bangingcolours.bandcamp.com.