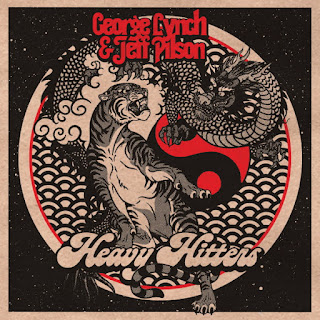 Former Dokken bandmates George Lynch and Jeff Pilson have teamed up to release a covers-filled album titled "Heavy Hitters." These two masters of their trade have also invited a bunch of special guests to help out including Marq Torien (Bulletboys), Angelo Moore (Fishbone) and drummer Brian Tichy (Whitesnake). New Zealand native Wil Martin also handles most of the vocal duties on this new release. It is the first album from Lynch & Pilson in almost a decade and the song selection may seem odd at first glance, but it deserves a listen before any judgement is made.

They begin with turning Joan Osbourne's hit "One Of Us" into a dark, raw, grunge-like anthem, which works well, until you get to that famous chorus, that does not seem to work in this heavy metal genre. Maybe, if they used the words, but gave it a totally different chorus, it would help if it wasn't as recognizable as the original. The funky drum breaks and guitar wizardry of Rufus & Chaka Khan's "You Got The Love" is perfectly executed, with the help of Marq Torien's vocals make this one of the highlights of the album. They inject a bolt of heavy metal energy into Carole King's "I Feel The Earth" and Martha & The Vandellas "Nowhere To Run," giving these songs a complete facelift, while the version of Duran Duran's "Ordinary World" is a nearly identical cover of the original, with an extra hard rock grind incorporated into the music. George Lynch and Jeff Pilson play it safe with the sacred sounds of Prince's "Kiss," by keeping the same vibe, but with a harder edge to the music. The album closes with a great version of R.E.M's "It's The End Of The World As We Know It (And I Feel Fine)," that keeps just enough of the original, while turning it into a modern metal anthem for 2020, and let's not forget the CD only bonus track, a live version of Little Richard's "Lucille," which is pure energy to crank the volume up to 11. To find out more about this latest collaboration between George Lynch and Jeff Pilson, please visit cleorecs.com.