Legendary Byrd & Burrito Brother, Chris Hillman Tells Us Stories About The "Time Between" 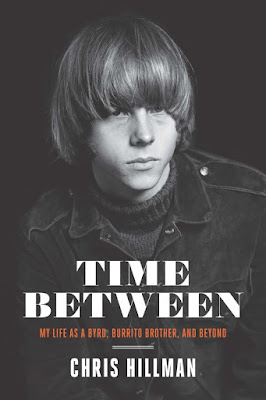 Legendary music artist, Chris Hillman recently released his autobiography titled "Time Between: My Life As A Byrd, Burrito Brother, And Beyond." Many of his peers, have called Hillman "a well-kept secret" and "a bona fide pioneering godfather to the divine crossroads of rock 'n' roll, country, bluegrass, folk, honky tonk and gospel music intersect." Chris Hillman was a founding member of The Byrds, one of the biggest folk/rock bands of the sixties and then helped create the standard of country rock with his time with The Flying Burrito Brothers. Hillman's new book is like walking into his mind and experiencing all that was going on through his rise to stardom.

Beginning with his early childhood memories of traveling to Los Angeles, California and how much his grandparents meant to him growing up. He received input from every music genre to help shape his identity as an artist. The beautiful harmonies of the Kingston Trio, the honesty of Pete Seeger and the passion of Little Richard gave a young Chris Hillman the start of his musical journey. It's fascinating reading about Hillman being in the studio, recording alongside David Crosby and realizing he was a rock star when The Byrds hit "Turn, Turn, Turn" topped the charts. The stories about hanging out with Gram Parsons, along with Mick Jagger and Keith Richards, could probably be worth hearing in detail as a another book's worth of material all on its own.

When one door would close, another would open. When The Byrds were finished, The Flying Burrito Brothers began and Americana music was born. While The Flying Burrito Brothers didn't reach the same success as The Byrds, it was the perfect ledge to climb to in Hillman's success as a solo artist, along with his partnership with Roger McGuinn. The book wraps up with Chris Hillman's life now, as a family man and a musical legend, as he was a critical part of a creating a musical genre that many follow today. To find out more about "Time Between: My Life As A Byrd, Burrito Brother, And Beyond," please visit chrishillman.com.