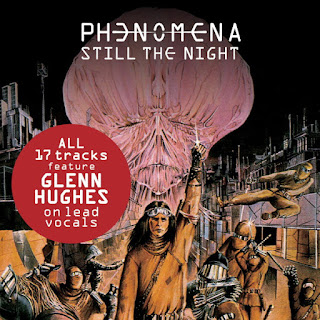 Legendary rock vocalist Glenn Hughes is the highlight of the newly released compilation from his latest project, Phenomena. The album "Still The Night" gathers together seventeen songs from the highly successful debut "Phenomena" album, along with tracks from the "Dream Runner" and "Psycho Fantasy" albums. The album is highlighted by two new mixes of the songs "Running With The Pack" and "Assassins In The Night," along with a new extended, 12" remix of the title song "Still The Night."

The set kicks off with the solid, pounding rhythm of "How Do You Feel," which allows Hughes to just open up and let loose with the vocals. The classic power ballad feel of "Dance With The Devil" feels perfect along his work with Deep Purple in the seventies. The band's hard rock sound is perfectly executed on "Believe," as the music and vocals capture the energy and emotion of the song. Other highlights of the this new compilation is the Black Sabbath-like delivery of "Double 6, 55, Double 4," the nostalgic eighties hard rock sounding "Higher" and the mystical metal approach of "Twilight Zone." To find out more about this new compilation from Phenomena, please visit facebook.com/Phenomenaconcept.