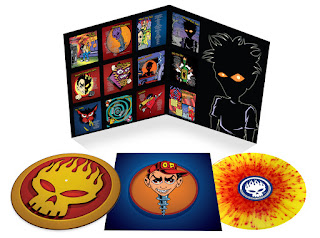 Punk-rock superstars, The Offspring bursts onto the music in the early to mid-nineties with their platinum-selling album "Smash." It brought punk music to the mainstream and turned The Offspring into the #1 party band with youthful anthems like "Self Esteem" and "Come Out And Play." The band has been on hiatus for a few years now, but Round Hill Records in association with UMe is celebrating the 20th anniversary of their album "Conspiracy Of One," with a special deluxe version of the album released on splatter red and yellow vinyl.

This album was their last in a string of platinum-selling albums by The Offspring and featured the hit singles "Original Prankster" and "Want You Bad." The new, special vinyl version of the album will be released on December 11th and comes with a custom made turntable slipmat featuring the band's flaming skull logo. This new release also includes the track "Huck It," which only appeared as a bonus on the Australian and European only releases of the album. So, now is the perfect time to dive back twenty years, to a simpler time, when masks were only though of for Halloween. Also check out The Offspring's YouTube channel (youtube.com/c/offspring) for new HD videos of their singles, including a video for the newly released "Christmas (Baby Please Come Home)," which may be a sign that The Offspring are ready to deliver new music to their fans once again. To find out more about this new 20th anniversary vinyl release of their "Conspiracy Of One" album, please visit theoffspring.shop.musictoday.com.