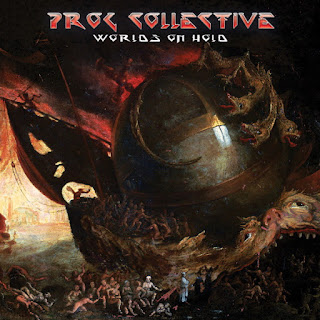 The progressive rock supergroup, The Prog Collective (led by Yes' Billy Sherwood) have returned with a new studio album titled "Worlds On Hold." Each album features an amazing line-up of special guests, and this one is no exception with Todd Rundgren, Geoff Tate and Joe Lynn Turner and Steve Hackett lending a hand, with others, on this new release. The new thirteen-song album begins with Rundgren and L. Shankar teaming up with the members of The Prog Collective on the title track, "Worlds On Hold," as everyone sounds like they are at the top of their game, giving their all to this project. The album is split with side one featuring all original compositions and side two filled to the brim with cover songs. Geoff Tate (formally of Queensryche) and Ron "Bumblefoot" Thai (formally of Guns N Roses) come together on the slow-building track "Two Trajectories," as Tate's iconic vocals perfectly fit alongside Thai's masterful guitar solo. The guitar work from Steve Hillage on "Brave New World" is exceptional, along with vocal support from Sonja Kristina (Curved Air).

The album continues with more than half-a-dozen cover songs, as Billy Sherwood performs a stellar, spot-on version of Peter Gabriel's masterpiece "Solsbury Hill," with help from Swedish guitarist Roine Stolt. Keyboardist Derek Sherinian teams up with the amazing vocals of Graham Bonnet for the bluesy ballad "A Whiter Shade Of Pale," before the closing the album with a light, airy pop version of The Beatles' "Penny Lane," sung wonderfully by the late John Wetton, along with a raw, eerie-sounding version of The Doors' "People Are Strange," with the perfect vocals supplied by New York Dolls' David Johansen. To find out more about this new release from The Prog Collective supergroup, please visit cleorecs.com.