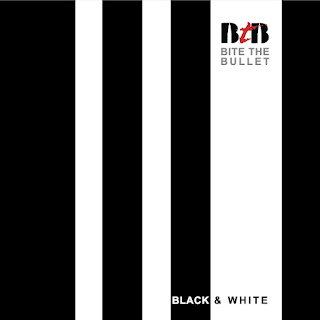 Arriving January 22nd is the return album from Bite The Bullet. It has been over thirty years since the release of their debut album, but a canceled opening slot on the Electric Light Orchestra tour found the band going into hiatus. In 2019, Bite The Bullet's debut album was reissued for it's 30th anniversary and the two founding members, Mick Benton and Graham Cowling decided to enter the studio once again to create a new album titled "Black & White."

The new twelve track release begins with the big guitar riffs of "Rocks To Stones," which highlights Bite The Bullet's nostalgic, pure, straight-up rock sound. The duo add a touch of mainstream classic rock melodies to the title song "Black & White," while "Falling" is pure eighties power ballad gold. The energy picks back up with the addictive tones of "I'll Go" and "You Never Knew," which are perfectly manicured for adult rock radio success. Their sound gets a little edgier with the chugging guitar chords and electrifying solo of "More Thank This," before Bite The Bullet finish off their new album with the hard rock jolt of "Bring It On" and the Foreigner-sounding "Last Chance Radio." To find out more about Bite The Bullet and their latest release "Black & White," please visit escape-music.com.