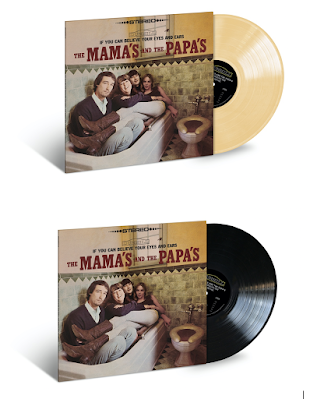 In celebration of the 45th anniversary of the release of the debut album "If You Can Believe Your Eyes And Ears" from singing sensation, The Mama's & The Papa's, Geffen/UMe will unveil a new vinyl edition of this album on black vinyl and exclusive opaque yellow vinyl. This twelve-song album was filled to the brim with hit singles like "Monday, Monday," "Go Where You Wanna Go" and "California Dreamin'," and also showcases the group's beautiful harmonies on their cover version of The Beatles' "I Call Your Name" and Bobby Freeman's "Do You Want To Dance." The Mamas & Papas would break-up only three years after the release of this album, but not before producing a couple more top-selling albums and a handful of hit singles.

The Mama's & The Papa's were major part of the California Valley musical movement that was shown in the documentary "Echo In The Canyon" and songs from this album were featured in the Quentin Tarantino film "Once Upon A Time In Hollywood." After being out of print for years, this new vinyl release also restores the album's original cover, which was censored due to the exposure of a toilet in the picture. This new vinyl edition of The Mama's & Papa's album "If You Can Believe Your Eyes And Ears" will be available on January 29th. For even more information, please visit udiscovermusic.com.