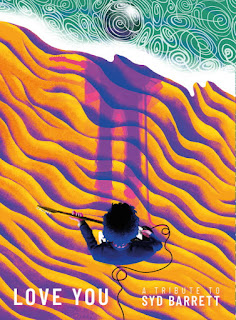 For Syd Barrett's 75th birthday, Gonzo Multimedia released a two-disc tribute to the artist titled simply "Love You." It features artists from around the world paying homage to the music of this rock icon. Most of the songs in this set are taken from Barrett's two solo albums following his departure from Pink Floyd, but there are also a couple of Floyd gems sprinkled in this set.

The first disc begins with the loving, acoustic-based "Terrapin," delivered beautifully by Italian artist Andrea Achilli, and on the flip side you have the raw, guitar-driven frenzy of "No Good Trying" by France's Luna Park. The dark overtone of "No Man'd Land" is executed perfectly by Mexico's Humus, while the psychedelic folk sound of "Octopus" by Sherpa (Italy) brings you right back to the sixties, along with In The Labyrinth's (Sweden) nearly eight-minute version of "Golden Hair." The edgy, hard rock approach of "She Took A Long Cold Look" and the sweet balladry of "Late Night" showcases the diversity in Barrett's songwriting, pulling out every emotion he was feeling at that moment. The first disc closes with a collaboration between the Italian duo of Boris Savoldelli and Umberto Petrin on the early Pink Floyd classic "Astronomy Domine."

Disc two starts off with the swirling psychedelic rock of "Baby Lemonade" from ST37 and the playful, innocent sound of "Love Song" by Italy's La Forma Delle Nuvole. One Of Syd Barrett's most masterful pieces of art, "Dominoes" is a sonic trip delivered by Germany's Sula Bassana, while "Waving My Arms In The Air/I Never Lied To You" is an acoustic folk tale from Italy's Luca Raio. The hard sounds of "Wolfpack" is executed perfectly by the USA's Keeper Of Atlantis, before the odd sound experiment "Birdie Hop" takes over your musical mind. This new set finishes with U.K. singer/songwriter Joss Cope filling in the role of storyteller for "Bob Dylan's Blues" and Nick Bensen (USA) mellowing out to the Pink Floydian "Vegetable Man." To find out more about this new collaboration "Love You - A Tribute To Syd Barrett," please visit gonzomultimedia.co.uk.